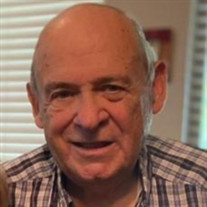 Wayne H. Kuhn passed away in Mandeville, LA on Tuesday, August 3, 2021, at the age of 81. Wayne was a native of New Orleans and current resident of Mandeville, LA and beloved husband of Janie Gomez Kuhn. Father of two sons, Stephan M. Kuhn and Michael W. Kuhn, Sr. Proud Grandfather of Donnie Kuhn, Laine Kuhn (Jeremy Catchot), Michael Kuhn, Jr., Landis Kuhn, and Sara Kuhn. Great-grandfather of Connor Bailey, Hunter Kuhn, and Oliver Catchou. Son of the late Lionel Harvey Kuhn and Lillian Linwood Zimmer Kuhn. Brother of Gary Lionel Kuhn (Linda), and his beloved sister Donna Kuhn Carrigee. He is also survived by a host of relatives. Wayne was a graduate of McDonough High School in New Orleans. He served in the Army National Guard for six years during the Vietnam War and was discharged in April, 1969. He was in the international transportation industry, spending 38 years with Strachan Shipping Co. in New Orleans and Dallas. He enjoyed the travels and making many lifelong friends along the way. He was most proud of the opportunity to open and manage the shipping company TMM Lines on Sept 1, 1996. Through acquisition TMM ultimately became CP Ships, whereby at the time of his retirement had become the seventh largest shipping company in the world. He retired from CP Ships in 2006 after an illustrious career. Wayne enjoyed his retirement playing his favorite sport: golf. He recounted the memory of his hole in one at Belle Terre Golf Course on September 21, 1991. He also enjoyed spending time at the casinos on the gulf coast and sitting on any body of water; gulf, lake, river, and enjoying the breeze, watching boats, fishermen, and everyday people enjoying life. He was a quiet man with a great sense of humor. He was a loyal and caring friend to all who got to enjoy his wit. Wayne was a member of the Atonement Lutheran Church in Metairie and enjoyed his drive across the lake to attend Saturday service. His love and belief in God were an inspiration and blessing to many. Relatives and friends are invited to attend his Memorial Service at Atonement Lutheran Church, 6500 Riverside Dr., Metairie, LA 70003 on Saturday, August 21, 2021 at 2:00 PM. Interment will follow at Garden of Memories Cemetery, 4900 Airline Dr., Metairie, LA 70001. He will be dearly missed by his family and numerous friends. Condolences and tributes can be posted at www.serenitycovington.com

Wayne H. Kuhn passed away in Mandeville, LA on Tuesday, August 3, 2021, at the age of 81. Wayne was a native of New Orleans and current resident of Mandeville, LA and beloved husband of Janie Gomez Kuhn. Father of two sons, Stephan M. Kuhn... View Obituary & Service Information

The family of Wayne H. Kuhn created this Life Tributes page to make it easy to share your memories.

Send flowers to the Kuhn family.