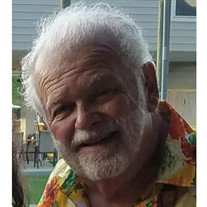 Harry Julian “Boo” Hawkins, Jr., age 76, died peacefully in his Diamondhead, MS home on Thursday, January 30, 2020. Mr. Hawkins was preceded in death by his parents, Harry Julian “Dooley” Hawkins, Sr., and Esther Lucas Hawkins and his cousin, Gloria Zatarain Landry. He is survived by his loving wife of 54 years, Sandra Rabalais Hawkins; his three children: Danielle Hawkins Capraro (James), Harry “Julian” Hawkins, III (Kerri), and Brian James Hawkins (Renée); and his two grandsons: Connor Brian Hawkins, and Cole Daniel Hawkins. He was also an honorary grandfather to Kevin and Ryan Derocha, Brittany and Jamie Capraro, and April Stevens and an honorary great grandfather to Ethan, Gavin and Corinne Derocha and Jayce Stevens. Mr. Hawkins was born in New Iberia, Louisiana, in 1943. He grew up in Algiers, Louisiana, where he resided for 20 years. He graduated from Rugby Academy of New Orleans, Louisiana and from the University of Southern Mississippi. He and his wife resided in Gretna, Louisiana, for 30 years, where “Boo” worked at J. Ray McDermott (Harvey Division) and later, as a teacher for the Jefferson Parish School Board. Upon retirement, “Boo” designed and built a home for he and his wife in Bay St. Louis, Mississippi, where they lived on the water and enjoyed boating and entertaining family and friends for 15 years. A Memorial Mass will be held at Most Holy Trinity Catholic Church, 9062 Kiln Delisle Road, Pass Christian, Mississippi, on Saturday, February 8, 2020, from 11:00 AM -1:00 PM, followed by a Celebration of Life until 1:30 PM.

The family of Harry Julian "Boo" Hawkins Jr. created this Life Tributes page to make it easy to share your memories.

Send flowers to the Hawkins family.