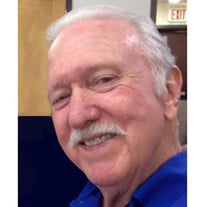 Charles “Chuck” Walter Schaefer, Jr. passed away surrounded by his family, at his residence in Covington, LA on Sunday, April 25, 2021, after a long illness. He was 78 years of age. Charles was born in New Orleans, LA and lived most of his life in New Orleans and Metairie. He resided in Covington for the past 20 plus years. He attended Fortier High School and earned his GED. He then joined the United States Navy and served in Vietnam as a Corpsman with the United States Marines. Following his military career, he became a New Orleans Fireman. He later retired from the New Orleans Police department after 16 years of service. He joined the Knights of Columbus and became a fourth-degree Knight with St. Jane de Chantal Knights of Columbus Council #12529, St. Padre Pio Assembly #2711. He worked for several years with International Securities and Investigations, Inc. as an insurance investigator. Afterward he worked with Liberty Mutual as an insurance investigator and had many other businesses as an entrepreneur. He ended his long career when he retired in 2006. He enjoyed fishing and hunting during his retirement. He is survived by his loving wife Cindy, whom he met in 1998 and married in 2017. His Mother-in-law Yvonne Nolan, and Sisters-in-law Dorinda Cordes and Thunder Redwomin. Loving father of Chante Schaefer Loupe (Reed). Brother of Edward Schaefer (JoAnn). Uncle of Shannon, Shelley, Sarah, David, Michael, Steve, Karen and Frederick “Ricky”. He is preceded in death by his parents Charles W. Schaefer and Viola Mayer Schaefer, his brother Frederick Seither, his sister Dorothy Lentz, his former wife Brenda Hebert Schaefer, and his nephew George Lentz, Jr. Grandfather of Andrew Schaefer Lowe, Jackson Reed Loupe, and Olivia Hazel Loupe. A Mass of Christian Burial will be held on Thursday, April 29, 2021 at St. Jane de Chantel Catholic Church, 72040 Maple St., Abita Springs, LA 70420 at 12:30 PM. Visitation begins at 10:30 AM and Words of Remembrance at 12:15 PM. In lieu of flowers the family is requesting donations to St. Jane de Chantal Knights of Columbus. Arrangements entrusted to Serenity Funeral Home, Covington, LA. Condolences and tributes can be posted at www.serenitycovington.com

Charles &#8220;Chuck&#8221; Walter Schaefer, Jr. passed away surrounded by his family, at his residence in Covington, LA on Sunday, April 25, 2021, after a long illness. He was 78 years of age. Charles was born in New Orleans, LA and lived... View Obituary & Service Information

The family of Charles "Chuck" Walter Schaefer Jr. created this Life Tributes page to make it easy to share your memories.

Send flowers to the Schaefer family.