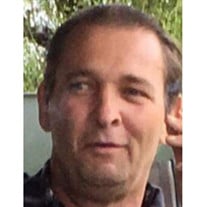 Billy Ray Taylor born November 29, 1968 in Slidell, passed away on August 24, 2019, in Slidell at the age of 50. Billy was a contractor from a young age following in his father’s footsteps and continued to do so up until the unfortunate event that caused him to have his leg amputated in 2018. Billy loved his family and loved living his life to the fullest. Billy was a loving son, father, brother, uncle, and friend and soon to be grandfather. He had one biological daughter, Raylynn Taylor and he also had 3 other children by a relationship that weren’t his biologically but loved them as if they were his own; Nick Hurd, Ashlynn Hurd, and Tristen Hurd. Billy was the son of Lillie Taylor of Slidell and the late Claude William Taylor of Slidell. Billy is survived by his five sisters and two brothers; Claude Taylor III of Slidell, Christine Penton and Darren of Pine, La., Lisa and Darrell Shepherd of Picayune, Ms., Charlene and John Mitchell of Bogalusa, Hope Taylor of walker, Phoebe and Valley Dupre of Slidell, and Woody and Julie Taylor of Pearl River. He is also survived by many nieces, nephews, friends and other family members who loved him dearly. Billy is preceded in death by his father Claude William Taylor Jr, his grandparents on his mother’s side, Goldie Ray Kelley and Floyd Lofton Sr. on his father’s side, Claude William Taylor Sr.and Ruby Cook, and his Uncle Sidney Harold Taylor who he loved dearly. Relatives and friends of the family are invited to attend Funeral Services on Tuesday, September 3, 2019 at Serenity Funeral Home, 20419 Hwy. 36, Covington, LA 70433. Visitation begins at 10:00 with the service at 12:00 noon. Interment immediately following at Nobles Cemetery, Pine, La. along-side his father and grandfather

Billy Ray Taylor born November 29, 1968 in Slidell, passed away on August 24, 2019, in Slidell at the age of 50. Billy was a contractor from a young age following in his father&#8217;s footsteps and continued to do so up until the unfortunate... View Obituary & Service Information

The family of Billy Ray Taylor created this Life Tributes page to make it easy to share your memories.

Send flowers to the Taylor family.