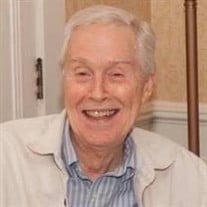 Albert Glenwood Jackson, “Glen” passed away on Monday, October 18, 2021, in Covington, LA at the age of 87. He was born in New Orleans and lived in River Ridge for most of his life. A graduate of Jesuit High School of New Orleans, Glen attended Tulane University, New Orleans where he received a Bachelor of Science in Civil Engineering. He then entered the US Air Force and became a Navigator in flight school, ultimately being raised to the rank of Captain before his discharge. After his military service and upon returning to Louisiana, he was a superintendent with Keller Construction. This led him to homebuilding, and developing his own business, Glenwood Homes, Inc. Glen served as President on the Board of the Home Builders Association of Greater New Orleans (HBA) and as the Vestry Treasurer at St. Paul’s Episcopal Church in New Orleans. After retiring from homebuilding, he managed records and accounting for Ridgewood Preparatory School in Metairie, LA. Glen loved to travel, was an amateur photographer, and an avid reader. He is remembered for his wonderful sense of humor, his corny jokes, his talent for writing and poetry, and his devotion and generosity to his family. Glen was preceded in death by his parents, Albert Elmo Jackson and Marie Elizabeth Bloemer Jackson. He is survived by his loving wife of 63 years, Virginia Emmett Jackson “Ginger” of Genoa, TX.; his three daughters, Deborah Jackson Dalio “Debi” and her husband Dr. Brian Dalio of Ft. Worth, TX; Teryl Suzanne Jackson “Teri” of Marietta, GA; and Keli Jackson Farr and her husband Roger Farr of Mandeville, LA. He was a devoted grandfather to Katherine Cousins Dutruch “Katie” (Micah Dutruch), Caroline Cousins Kolle (Ian Kolle), and Nicole Marie Cousins; and great grandfather to Ethan Glenwood Dutruch. The family requests donations be sent, in lieu of flowers, to Tunnel to Towers Foundation at https://t2t.org/donate/. Relatives and friends of the family are invited to attend a Memorial Service and Celebration of Glen’s Life on Sunday, November 7, 2021 at 2:00 PM at St. Michael’s Episcopal Church, 4499 Sharp Road, Mandeville, LA 70471. Arrangements entrusted to Serenity Funeral Home, Covington, LA. Condolences and tributes can be posted at www.serenitycovington.com

Albert Glenwood Jackson, &#8220;Glen&#8221; passed away on Monday, October 18, 2021, in Covington, LA at the age of 87. He was born in New Orleans and lived in River Ridge for most of his life. A graduate of Jesuit High School of New Orleans,... View Obituary & Service Information

The family of Albert Glenwood "Glen" Jackson created this Life Tributes page to make it easy to share your memories.

Send flowers to the Jackson family.