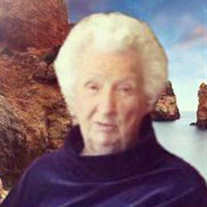 Vira May Lyon Kelton Harvey peacefully, passed away Sunday morning, October 4, 2020, at Resthaven Living Center in Bogalusa, Louisiana days away from her 102nd birthday. She was born on October 25, 1918, in Isle of Wight, VA. Vira is survived by her six children; Bob Kelton and his wife Claudia, Maywood Racz, Sealann Longwell, Mac Kelton and his wife Nancy, Sally Thomas and her husband Huey, John Kelton and his wife Sue, as well as her 18 grandchildren, 21 great grandchildren and one great great grandchild. Vira was born at home during the Spanish Flu epidemic to Aubry Lyon and Maywood Edwards Lyon, with the family moving to Welsh, West Virginia when she was 4 years old. She shared fond memories of riding with her father on hotshot deliveries and playing in the high school band. She attended a 2 year teaching college and became a schoolteacher. In 1940, she married Ralph Kelton, and they made their home in Baton Rouge, LA, where they raised a family of 6 children. Mom would claim it an accomplishment that none of her children ended up in jail. She loved gardening, reading and healthy cooking. A lifelong learner, she enrolled in LSU in her 60s and earned her BA in General Studies after her youngest child graduated from LSU. Moving to Diamondhead, MS in 1985, she took up golf and remained very active. Her grandson Marshall tells of her beating him in golf, and her son John confesses she beat him often, too. She was an encourager, interested in what her children and grandchildren were achieving. She was described as a force of nature, living a long, full life, and she will be greatly missed. The family will hold a Memorial Service and scatter her ashes at a later date. Arrangements entrusted to Serenity Funeral Home of Covington, LA.

Vira May Lyon Kelton Harvey peacefully, passed away Sunday morning, October 4, 2020, at Resthaven Living Center in Bogalusa, Louisiana days away from her 102nd birthday. She was born on October 25, 1918, in Isle of Wight, VA. Vira is survived... View Obituary & Service Information

The family of Vira Harvey created this Life Tributes page to make it easy to share your memories.

Send flowers to the Harvey family.