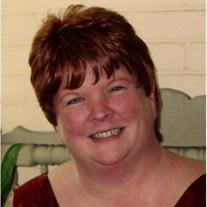 Terry Lyle McIntosh, age 62, passed away peacefully on Monday, January 4, 2021 in Covington, LA following complications from a stroke. Born in New Orleans in 1958, she was the youngest of five siblings. She lived in the metro area for most of her life, and most recently resided in Mandeville. She was predeceased by her parents, Thomas Boone McIntosh, Jr. and Elizabeth Blain “Betty” Lyle McIntosh, and sister Elizabeth Anne “Liz” Nordvoll. She is survived by her siblings Tommy McIntosh (Chris) of Laplace, Jeanie Kuhn (Kenny) of New Orleans, and Kim Pretus (Ron Nicholas) of Venice, FL. She is also survived by her stepmother Sybil McIntosh, brother-in-law Sigurd Nordvoll (Judy), nieces and nephews Zachary McIntosh (Destiny), Elliott Kuhn (Brandi), Samantha Kuhn, Lisa Pretus Ebarb (Brian), Jonathan Pretus (Julia), and Brian Pretus (Catherine), as well as numerous other relatives, cousins, and dear friends. Terry truly never met a stranger. She will be deeply missed by many and remembered as a cheerful, supportive, and loyal friend. A proud graduate of John F. Kennedy High School, as a teenager she costumed as the cougar mascot, and as an adult she devoted immeasurable time to organizing alumni groups, locating classmates and teachers, and planning reunion activities. Terry loved participating in Mardi Gras festivities as a float rider, served for years as Director of the Bards of Bohemia Ball, and reigned as the 2009 Queen of the Krewe of Pygmalion. She also immersed herself in theater activities for much of her life, from performing onstage to working behind the scenes in local productions at St. Luke’s Church, NORD Theater, and Le Petit Theatre. The family wishes to thank Terry’s caregivers at Trinity Trace and Passages Hospice, and extends a special thanks to her treasured friend Matt Tyler who guided her care throughout these difficult months. Due to pandemic restrictions, a Celebration of Terry’s life will be planned on a later date. The family requests that any flowers or memorial gifts should be delayed until the Celebration of Life event is scheduled. For now, you can celebrate her life each day by reaching out, doing a good deed, and sharing your smile with someone else. Services entrusted to Serenity Funeral Home, Covington, LA. Condolences and tributes can be posted at www.serenitycovington.com

Terry Lyle McIntosh, age 62, passed away peacefully on Monday, January 4, 2021 in Covington, LA following complications from a stroke. Born in New Orleans in 1958, she was the youngest of five siblings. She lived in the metro area for most... View Obituary & Service Information

The family of Terry Lyle McIntosh created this Life Tributes page to make it easy to share your memories.

Send flowers to the McIntosh family.