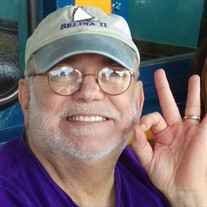 Stanley Lezin L'Hoste, Jr. entered fully in to the arms of his Savior on Monday afternoon, September 17, 2018 in Slidell, LA following a long battle with multiple health issues. He was 69. Stan grew up in Chalmette, LA and enjoyed a long career in tourism and advertising in New Orleans; many years of coaching soccer with all three of his kids and all the other players he loved so much; and his lifelong hobbies of cooking, landscaping, and gardening.  He spent the last season of his life enjoying these hobbies with his wife, Vel Lena at their home in Mandeville, LA.  He was a member of Church of the King and will be missed by his many brothers and sisters in Christ there. Stan is survived by his wife, Vel Lena; his three children with his ex-wife, Kathy: their oldest son, Stanton, and his wife Molly; their second son, Jared, and his wife Amanda; their youngest daughter, Kaitlyn; and their grandson, Vance. He is also survived by his three children, Melissa, Stephen, and Stephanie;  two step children, Casey and Kayla; and many other dear friends and family. A celebration of Stan’s life will be held at 10:30 a.m. on Saturday, September 29, 2018, at Serenity Funeral Home in Covington, LA.  All are welcome to attend and celebrate his life.  In lieu of flowers, the family asks that donations in his honor be made to Hospice condolences may be left at www.serenitycovington.com.  Stanley gave the gift of full body donation to Science Care (ScienceCare.com) to further Science and Medical research.  In his honor, a tree will be planted.

Stanley Lezin L&#39;Hoste, Jr. entered fully in to the arms of his Savior on Monday afternoon, September 17, 2018 in Slidell, LA following a long battle with multiple health issues. He was 69. Stan grew up in Chalmette, LA and enjoyed a long... View Obituary & Service Information

The family of Stanley L'hoste created this Life Tributes page to make it easy to share your memories.

Send flowers to the L'hoste family.