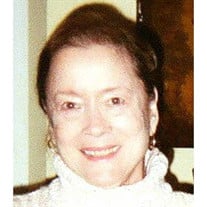 Shirley Hill McCune died peacefully at her home in Talisheek, Louisiana, from natural causes on Monday, March 16, 2020. She was 85 years old. She was the loving wife of Michael M. McCune for the past 65 years. Although born in New Orleans, Louisiana where she lived most of her life, she spent the last 24 years residing in Talisheek, LA. Shirley attended St. Joseph Elementary School on Tulane Ave. and thereafter enrolled in St. Catherine of Sienna for her 8th grade year when her family moved to Metairie. She was a proud 1953 graduate of St. Mary’s Dominican High School. She then furthered her education by attending Charity Hospital’s School of Radiologic Technology graduating as an X-ray Technician. Although she initially started working at Ochsner Hospital after graduation, she married shortly thereafter and decided to dedicate her life to raising her children when she and Mike began their family. She reentered the work force years later when her children were grown as there was a special need for X-ray Technicians in the marketplace. At this time, she became disciplined in Radiation Therapy having completed this field of study at Ochsner Hospital. She worked at Charity Hospital as an X-ray Technician and Radiation Therapist, a job she truly enjoyed, until she retired. While her hobbies included gardening, sewing and spending time with her family, all of which she passed down to her daughters, her true passion was her faith. Her trust in God was paramount in everything she did, every decision she made and every relationship she had. Her love for God and for all of us is evidenced by the fact that many of her prayers were for those who have no one to pray for them. Her grandchildren were amused when every prayer did not end with “Amen” but rather “Yay God!” There will never be a more kind, accepting and inclusive person than Shirley. She loved holding, kissing and rocking babies and is known as the original “Baby Hog”. Her daughters take great solace in the fact that the “Baby Hog” will be meeting their children who have gone to heaven before them. When told by her children, grandchildren and great grandchildren that they loved “Grammie”, she would always reply “Love you more!” Beloved mother of Bonnie Clay (David), Sandi Giambrone (Dominick), Kathleen Powell (Marc), Trudie Herbert, Jennifer Riccobono (Joseph), and Mary Lambert (Nolan). Dearly loved grandmother “Grammie” to Kellie Clay Andersen (Jason), David Clay, Jr. (Michele), Michael Clay (Brandi), Dominick Giambrone, Jr., Cristina Giambrone, Elizabeth Giambrone Abboud (Gordon), Amanda Powell Prazack (Scott), Rebecca Powell Benoit (Matthew), Edward Hunter Powell, Tracey Anne Jenkins (Timothy), Elyse Herbert Chamorro (Renato), Hayley Herbert, Stephen “Mac” Herbert, III, Mary Riccobono Hawkins (Josh), Louis Riccobono (Lauren), Margaret Riccobono, Joseph Riccobono, Jr. (Mandi), Jedidiah Riccobono (Rebekah), Anna Riccobono, Taylor Lambert, Meredith Lambert, and Nolan Patrick Lambert, Jr. She was also so proud of her 29 great-grandchildren whom she loved “more”. Preceded in death by her parents, Harry Rowland Hill and Gertrude Pierce Hill, her in-laws Mary Mitchell McCune and Lawrence J. McCune, her granddaughter, Etienne Anne Herbert and siblings and in-laws: her twin sister Mary Riecke, Richard Riecke, John Chester Hill, Helen Hill, Dr. Lawrence McCune, Beverly M. Schexnaildre, Mary Anna McCune Messonnier, Irwin Messonnier, and James McCune. Survived by her sister-in-law Sylvia McCune, special cousins Sharon V. Hulin (Ben) and Warren Villemarette (Peggy), and numerous nieces and nephews who loved their “Aunt Shirley” and whom she loved dearly. Arrangements for a Memorial Mass and Celebration of Life Reception have been put on hold pending the resolution of the CoronaVirus Pandemic. Date and time of Service will be updated on the Serenity Funeral Home website when that information becomes available. The family is requesting, in lieu of flowers, please donate to the American Heart Association, American Diabetes Association, American Cancer Society, Knights of Columbus, or a charity of your choice. Condolences and tributes can be posted at www.serenitycovington.com

Shirley Hill McCune died peacefully at her home in Talisheek, Louisiana, from natural causes on Monday, March 16, 2020. She was 85 years old. She was the loving wife of Michael M. McCune for the past 65 years. Although born in New Orleans,... View Obituary & Service Information

The family of Shirley McCune created this Life Tributes page to make it easy to share your memories.

Shirley Hill McCune died peacefully at her home in Talisheek,...

Send flowers to the McCune family.