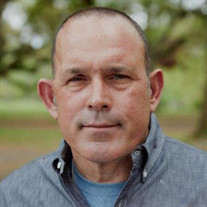 Russell “Rusty” Armstrong Hall Jr., 52, a resident of St. Bernard parish, passed away on Tuesday, July 6, 2021 after a long battle with brain cancer. He is survived by his loving wife of 29 years, Melinda Murphy Hall; son, Zachary Hall; “kids”, Nataliya and Marisa; sisters; Mary Ann (Ronald) Thompson, Cynthia (Glen) Gabb, and Adrienne Lezina; father-in-law, Lamont “Whip” Murphy (Cindy); mother-in-law, Cynthia Murphy; nieces and nephews; Jeremy (Erica), Jaimie (Luke), Olivia, Gregory, Dru, Henry, Mia, and Liam; great nieces and nephews; Abigail, Katherine, Elise, Christos, and Grant. He will also be missed by the Blum family and many friends. Rusty lived life with an intensity that is difficult to communicate in words. His love of life could be felt by all of those around him. He enjoyed spending time with his wife, Melinda, and son, Zachary, as well as with his very near children, Nataliya and Marisa, and his entire extended family. He was the life of any family gathering, whether he was prodding his sisters to liven things up or entertaining one of his nieces or nephews with his latest story. To those outside of his family, his intensity and love of storytelling came across in his tendency to TELL HIS STORIES ONLINE IN ALL CAPS!!! To those who knew him best, that was the way he really was, life in all caps. Rusty took this love for life into his work. He was a proud union electrician for 25 years. He was a dedicated employee spending all 25 of those years working for one company, Frischhertz Electric. Even after being diagnosed with cancer, he tried to maintain his ability to work for as long as possible. Once he retired however, he enjoyed reminding everyone when Monday came around that they had to go to work while he did not. Rusty also took his love for life into his play. He was an avid runner, cyclist, golfer, and jet skier at various times of his life. Before taking to the water, he was active in his local running and cycling groups, racing often with the New Orleans Track Club. He once qualified to run the Boston Marathon, a feat that a very small percentage of runners accomplishes in a lifetime. He maintained this love for exercise until very near the end of his life as he gave everyone updates on his frequent elliptical workouts. While those close to Rusty will continue to mourn his loss, we will also continue to celebrate his life. While it will often feel as though the air has left the room, there will always be plenty of memories of him with which to fill it, even if only partially. We invite family and friends to join us as we remember Rusty both in sadness for his loss and in gladness for the time we were able to share with him. A Funeral Service will be held at 12:00 Noon, on Wednesday, July 14, 2021, at Our Lady of Prompt Succor Catholic Church, 2320 Paris Rd., Chalmette, LA 70043. Visitation will be held before the Service from 10:00 AM until Mass begins at 12:00 Noon. Father Marlon will officiate the Service. There will be a private interment at St. Louis Cemetery No.1 in New Orleans immediately following. Arrangements entrusted to Serenity Funeral Home, Covington, LA. Condolences and tributes can be posted at www.serenitycovington.com

The family of Russell "Rusty" Armstrong Hall Jr. created this Life Tributes page to make it easy to share your memories.

Send flowers to the Hall family.