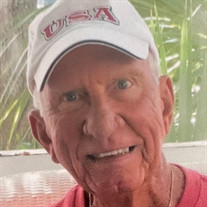 Ronald Joseph Bordelon, 88, of Metairie, LA passed away on Friday, June 18, 2021. He is survived by his beloved wife of 66 years, Barbara McDermott Bordelon, who cared for him with unconditional love. He was the loving father of his three daughters: Karen Dantin (Jack), Lynn Hoover (Gary), and Cheryl Bordelon. He was the devoted grandfather of Natalie Morrison (Brad), Rachelle Druffel (Brandon), Emily Carruth (Ryan), Jack “Trey” Dantin (Blake), Haley Fayette (Corey), Amber Springmeyer (Robby), and Stephen Schmitt, Jr.; and great grandfather to Kylie, Colin, Aubrie, Annie, Eli and Alexis. He also leaves behind his caring sister, Barbara Pflug (Robert), his sister-in-law, Jackie Bordelon, his four godchildren: Joyce DuSauls, Roxanne Lousteau, Cindy Kehoe, and Stephen Pflug; and numerous nieces and nephews. Ronald was preceded in death by his father, Frederick Bordelon, Sr; his mother, Elvadine Bordelon; his brother Frederick “Baby” Bordelon, Jr.; and his two nephews, Ricky Bordelon, and Jeffrey Pflug. Ronald was born in 1932 in New Orleans, LA. He attended Redemption High School. He was an Army Veteran, serving in the Korean War, and a member of the American Legion for 24 years. Belonging to the United Steelworkers of America Local 5433, Ronald worked at the American Can Company for 28 years and Boh Brothers for 10 years. In the late 1960’s he became an avid runner. He was one of the first members of the New Orleans Track Club and completed 3 full marathons. His passions included: traveling the world with his wife; teaching Cajun dancing at Michaul’s; spending time with his family; and making people laugh with his stories and jokes. He will be greatly missed by all. Relatives and friends are invited to attend a Celebration of His Life at St. Angela Merici Church, 901 Beverly Garden Drive, Metairie, LA on Monday, June 28, 2021. Visitation will begin at 10:00 AM followed by Mass of Christian Burial at 12:00 Noon. Interment will follow at St. Louis Cemetery #3. In lieu of flowers, the family asks you to please have a Mass said in his name at St. Angela Merici or donate to Compassus Hospice, 2450 Severn Avenue, #315, Metairie, LA 70001. Arrangements entrusted to Serenity Funeral Home, Covington, LA. Condolences and tributes can be posted at www.serenitycovington.com

Ronald Joseph Bordelon, 88, of Metairie, LA passed away on Friday, June 18, 2021. He is survived by his beloved wife of 66 years, Barbara McDermott Bordelon, who cared for him with unconditional love. He was the loving father of his three... View Obituary & Service Information

The family of Ronald Joseph Bordelon created this Life Tributes page to make it easy to share your memories.

Ronald Joseph Bordelon, 88, of Metairie, LA passed away on Friday,...

Send flowers to the Bordelon family.