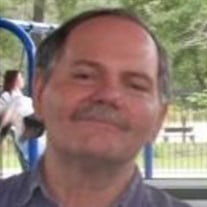 Richard Andrew “Scotty” Scott, Sr. passed away on Monday, April 27, 2020. He was born in New Orleans, LA. Richard joined the U.S. Marines in 1969, served in the Vietnam War from 1972-1974. He lived in Metairie until 1980 then he moved to Covington, LA. He was nicknamed “Goomba” because he made a name for himself in boxing at the Westbank Boxing Gym. He loved riding his Harley. Self employed as a heavy equipment operator for over 40 years, until he became disabled in 2005. Son of the late Woodrow W. Scott, Sr. and Annie Hubbard Scott. Father of Woodrow W. Scott, III, Richard A. Scott, Jr. (Susan), and Rachael Ann Bordelon. Brother of Woodrow W. Scott, Jr., Anita S. Nicholas (Earl), Phyliss S. Ness, and Carol S. Roach (Jim), and the late Michael Scott (surviving spouse, Pat). Grandfather of Kadence D, Kaelynn L, and Kyndall B. Loving uncle of Dawn Richoux, Douglas Yennie, Sean Scott, Gregg Scott, and Phoebe Fornier. A Memorial Service will be held on a later date. Date and time of Service will be updated on the Serenity Funeral Home website when that information becomes available. Condolences and tributes can be posted at www.serenitycovington.com

The family of Richard Andrew "Scotty" Scott Sr. created this Life Tributes page to make it easy to share your memories.

Send flowers to the Scott family.