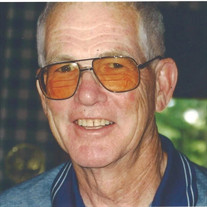 “Well done good and faithful servant” (Matt 25:23) On May 29, 2021 Rene’ William Rizan, age 91, passed from this life into the rewards of His heavenly Father. He was preceded in death by his parents, Armand Louis Rizan, Ruby Reeves Rizan and his brother, Armand Rizan, Jr. He is survived by his wife of 71 years, JoAnn Hawkins Rizan, daughters, Denise Rizan Wagner (Michael), Aimee’ Rizan White (Brian), Suzanne Rizan Burns (Jeff), Yvonne Rizan, and Jeanne Rizan Bussolati (Jim). Loving Grandfather of 15 grandchildren and 27 great grandchildren. Rene’ was born on January 25, 1930, and he graduated from St. Aloysius High School. He met the love of his life, JoAnn when they were 12 years old, were married in 1950 and became the devoted father of his five daughters. He worked with his father in the family business (A.L. Rizan Terrazzo) until his father’s death and then was employed by Boeing where he won numerous awards for his contribution to the space program. Rene’s love of flying inspired him to get an aviator’s license and buy a Swift airplane. In 1993 he and JoAnn moved from River Ridge to Abita Springs on the Northshore where they became parishioners of St. Jane deChantal Catholic Church and became a founding member of the Knights of Columbus Council, 4th Degree. He was known for his devotion to St. Padre Pio and for his artistry in making beautiful rosaries, along with repairing everyone’s worn and broken ones! His dream was to create a miniature train around the 28 acres of his home for his grandchildren and great grandchildren to ride and enjoy. His heritage is still here with us, the tracks are worn, the engine is rusty…but the dream lives on in all of us. In lieu of flowers, the family requests Masses said for his sweet soul. We will celebrate his beautiful life at a Holy Mass at St. Jane deChantal Catholic Church, 72040 Maple St., Abita Springs, Thursday, June 3, 2021, at 12:00 noon. Visitation at the church will start at 10:00am. Interment immediately following at St. Joseph Abbey. Condolences can be posted at www.serenitycovington.com

The family of Rene' William Rizan created this Life Tributes page to make it easy to share your memories.

Send flowers to the Rizan family.