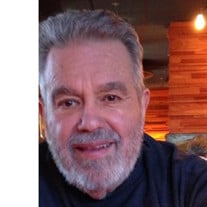 Peter Marius Soules, Jr. passed away on Thursday, April 30, 2020 at the age of 81. Born on June 17, 1938, he was a native of New Orleans and a resident of Abita Springs for the past 39 years. Peter is survived by his wife of 55 years, Lynnette Hubert Soules. He was born to the late Peter Soules, Sr. and Jeannette Andersen Soules. He was also preceded in death by his mother-in-law, Carmelite Hubert and father-in-law Benny Hubert, and his sister Yvonne Soules Gullo. He is survived by his sister, Janice Soules Castillo of Bowie, MD, his brother William Soules of Destin, FL, and his sister-in-law Letty Jane Hubert Clark of Metairie, LA. He is also survived by numerous nieces, nephews and cousins. Peter was a graduate of Holy Cross High School and LSUNO. He and Lynnette lived in New York City for 15 years, where he worked for Mount Sinai Hospital in financial management. They loved NYC and left its hustle and bustle to return to their roots, settling in Abita Springs. Peter would say “what a culture shock, but a welcomed one”. He opened Peter Soules’ pour la Cuisine, a cookware and cooking school in Mandeville in 1981. He was in his glory: he always loved being around food. He had chefs like Paul Prudhomme and Frank Davis teach classes there. He later became Food & Beverage Manager at the Tchefuncta Country Club, retiring in 1997. Peter had been very active in Abita Springs and St. Tammany life. He was awarded the Abita’s Citizen of the Year honor in 1992. He was on the Board of the Abita Springs Trailhead Museum for several years, resigning in 2013 after he suffered a stroke. This did not keep him down. He helped organize the St. Jane de Chantal Knights of Columbus and loved growing camellias. He was active in the New Orleans Camellia Club and the Northshore Camellia Club, winning several awards. Peter was active in the St. Tammany Historical Society, helping to publish and market their successful history/cookbook “Home Cooking”. Peter loved to travel, Paris his favorite. His long awaited dream came true when he and Lynnette and Letty Jane went on a Viking Cruise of the Danube and Rhine rivers, along with his walker, his “Ferrari”. Those who knew Peter knew he had a zest for life, a quick wit, and terrific sense of humor. He loved his little terriers and his big Irish Wolfhound. And what a head of hair he had! Sincere gratitude to St. Tammany Parish Hospital, Franklinton’s Heritage Manor, Riverside Medical Center and Community Care Hospice, Hammond for their care and communications. Private Graveside Services are to be held at Mandeville Cemetery. Masses or donations can be made to St. Jane de Chantal Catholic Church, 72040 Maple St., Abita Springs, LA 70420, or a Memorial Mass ministry of your choice. Condolences and tributes can be posted at www.serenitycovington.com

Peter Marius Soules, Jr. passed away on Thursday, April 30, 2020 at the age of 81. Born on June 17, 1938, he was a native of New Orleans and a resident of Abita Springs for the past 39 years. Peter is survived by his wife of 55 years, Lynnette... View Obituary & Service Information

The family of Peter Marius Soules Jr. created this Life Tributes page to make it easy to share your memories.

Send flowers to the Soules family.