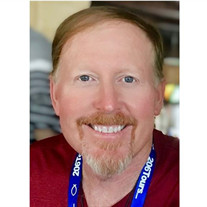 Michael James Belsom passed away peacefully on Thursday, October 29, 2020. He was a devout Roman Catholic who served and inspired many people who followed his journey. He was an active member of Saint Jane de Chantal Catholic Church in Abita Springs and the Knights of Columbus, St Jane de Chantal Council #12529. Michael was born and raised in Marrero and was a resident of the North Shore since 2004. As a child, he spent most of time in Lafitte with his beloved grandparents, uncles, aunts, and cousins. He graduated from Archbishop Shaw High School in 1985, earned a Bachelor of Science degree in Social Counseling from Our Lady of Holy Cross College in 1990, and a Master of Business Administration degree from Touro University in 2004. He served as a Peace Corps Volunteer in Romania as a Social Work Instructor in 1997. Michael served as active duty Staff Sergeant in the U.S. Army 21st Air Defense Artillery Battalion and served a tour in South Korea, followed by service in the U.S. Army Reserve, 1-95th Engineer Training Battalion and loved and respected his reserve brothers greatly. Michael was a kind and loving husband, father, and loyal friend. Beloved and devoted husband of Tena Tell Belsom for 19 years. Loving father of Peyton Michael Belsom, step-father of Lacie Hunter Pickard (Layton), and Cody Tell Hunter (Marisa). Son of the late Ralph and Rose Belsom, son-in-law of Paul F. Dunn Jr. and Vancia Serigne Dunn. Brother of Karl Belsom (Julie). Brother-in-law of Toni Tell, Kendall Dunn, Sr. (Julie), Robert Tell (Loren) and step brother in law to Tina Smith. Uncle of Kristi Belsom, Isabella Chancey Oseguera (Justin), Diego Dominguez, Kendall Dunn Jr., and Beckett Dunn. Grandfather of Reese, Gavin and Sawyer Pickard, and Henley, Marlowe, and Weslyn Hunter. He will be missed by his community, cherished neighbors and all who knew and loved him. Relatives and friends of the family are invited to attend a Mass of Christian Burial on Wednesday, November 4, 2020 at Serenity Funeral Home, 20419 Hwy. 36, Covington. Visitation at the funeral home from 10:00am until 12:00 noon followed by a Mass at St. Jane de Chantal Catholic Church, 72040 Maple St., Abita Springs at 12:30pm. Interment will take place at S.E. Louisiana Veterans Cemetery, Slidell at a later date. Condolences can be posted at www.serenitycovington.com.

Michael James Belsom passed away peacefully on Thursday, October 29, 2020. He was a devout Roman Catholic who served and inspired many people who followed his journey. He was an active member of Saint Jane de Chantal Catholic Church in Abita... View Obituary & Service Information

The family of Michael James Belsom created this Life Tributes page to make it easy to share your memories.

Send flowers to the Belsom family.