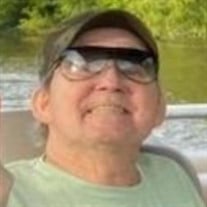 Marvin W. Lee The Angels came for Marvin on Friday, August 6, 2021, after a two year battle with kidney cancer, at home. He was born in 1950, in Homer, LA, the son of Dolph Lee and Melba Jean (Barnard) Lee. Marvin graduated from De Ridder High School, Class of 1968. He attended Northwestern State University and Northwood Institute. He served with the U.S. Army in Seoul, Korea. He married Lisa Rabbitt, wife of almost 40 years. He had a successful career of 45 years in the oil and gas industry, working for drilling contractors in the marine department on floating vessels. Areas he worked include the Gulf of Mexico, Alaska, and several overseas locations during his tenure. He was preceded in death by his parents. Surviving in addition to his wife Lisa (Rabbitt) Lee, are his son Grant David Lee, daughter Jessica (Lee) Wardlaw and her husband Russell Wardlaw; three grandchildren Sophia and James Wardlaw, and Hazel Frazier; two sisters Cynthia (Lee) Jagneaux and her husband Jim of Covington, LA, Candice (Lee) Horn and husband Jack of Friendswood, TX; one brother Jerry D. Lee and his wife Debbie of Mandeville, LA; as well as many nieces and nephews. Marvin lived and loved life to the hilt. He loved his family and friends and was fiercely loyal to them. He loved his Dallas Cowboys from childhood. Loved playing his guitars while singing his favorite tunes, either alone or with friends, which he did for years. His “mantra” on Facebook, almost every Friday afternoon for the past few years was, “It’s five o’clock somewhere”! He has a dedicated room with guitars mounted on a wall coupled with framed, autographed Dallas Cowboy jerseys mounted also. Due to the increase in Covid cases recently, a small Service of Remembrance has been postponed until further notice. Those who wish to remember Marvin in a special way are asked to make donations in his memory to either the American Cancer Society or American Kidney Association. Arrangements entrusted to Serenity Funeral Home, Covington, LA. Condolences and tributes can be posted at www.serenitycovington.com

Marvin W. Lee The Angels came for Marvin on Friday, August 6, 2021, after a two year battle with kidney cancer, at home. He was born in 1950, in Homer, LA, the son of Dolph Lee and Melba Jean (Barnard) Lee. Marvin graduated from De Ridder High... View Obituary & Service Information

The family of Marvin W. Lee created this Life Tributes page to make it easy to share your memories.

Send flowers to the Lee family.