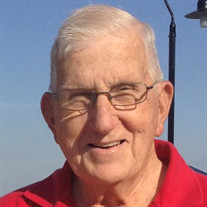 Marvin Paul Guillie, beloved husband of Marjorie Catherine (McCrocklin) Guillie, and father of Gregory (Robin), Suzanne Huffman (Charles), Annette Tullier (Ronald), Nancie Clement (Brian) and Douglas (Marisa) passed away peacefully on Saturday evening, March 7, 2020. He was a resident of Camelot Community Care in Ponchatoula, Louisiana where he lived with Marjorie, his wife of 67 wonderful years. He was 91 years old and preceded in death by his parents, his brother Cyril and half-brother William. In addition to their five children, Marvin and Marjorie have nineteen grandchildren and twenty-eight plus great grandchildren. Born in 1928 in New Orleans to William and Margret (Verdun) Guillie, he attended St. Francis of Assisi Elementary School and Jesuit High School where he participated in band and Naval Junior Reserve Officer Training Course activities. As a young man, he was active in Boy Scouts, Sea Scouts, the Civil Air Patrol and Civil Service programs. Growing up, he worked alongside his father, a Master Plumber, and commented that “I never saw him idle.” Like his father, he collected old newspaper and scrap metal for the war effort. After Jesuit High School, he attended the Soule Business College, then worked for a brewing company, a hardware store, and a railroad company where he performed billing and equipment inspections. In 1946, he enlisted in the US Navy, and served on the island of Saipan as a Yeoman 3rd Class. At the end of World War II he was awarded the Victory Medal. Upon returning home, he worked for the George H. Lehleitner Company where he met and later married Marjorie in May of 1952. After stints with the National Tank Company and Western Auto, he was employed for over 35 years by the IBM Corporation as a Parts Clerk and Regional Parts Manager. During his employment at IBM, he received numerous awards for safety, process improvement and cost savings. Near the end of his IBM tenure, he was selected to perform civic duty in support of Louisiana’s Special Olympics’ soccer program. As a coach and league administrator, he was cited by Eunice Kennedy Shriver for his commitment to changing the lives of people with intellectual disabilities. He still found time to sail the New Orleans lakefront, serve as a Scout Leader, camp with his family, and collect shells off Gulf Coast beaches. After retiring from IBM, Marvin and Margie relocated from Metairie, Louisiana to Hacoda, Alabama to serve Christ at Camp Victory. Over 30 plus years as a staff members and volunteer, Marvin assisted with the continuous buildout and renewal of Camp Victory’s facilities, nature activities, outdoor sports, retreats and witnessing to children and young adults. Living in Hacoda opened yet another volunteer opportunity at the US Army Aviation Museum where he served as a researcher for over 20 years. Marvin and Margie were long-time members and faithful supporters of the Dothan Community Church, pastored by Dr. W. Charles Lewis. While he filled many roles, Marvin was a wonderful husband, devoted father, patient teacher, coach and life-long friend who will be missed and remembered for the lessons of love he taught his family, the way he treated others, and his deep and abiding love for Christ. Those wishing to make a donation in Marvin’s memory may do so to: • Camp Victory, 363 Victory Circle, Samson, AL 36477 (334) 898-7948 • The US Army Aviation Museum, 6000 S Novasel St, Fort Rucker, AL 36362 (334) 598-2508 • Dothan Community Church, 4390 Westgate Parkway, Dothan, AL 36303 (334) 794-9464 • Special Olympics Louisiana, 46 Louis Prima Dr, Ste. A, Covington, LA 70433 (800) 380-3071 Condolences and tributes can be posted at www.serenitycovington.com

The family of Marvin Paul Guillie created this Life Tributes page to make it easy to share your memories.

Send flowers to the Guillie family.