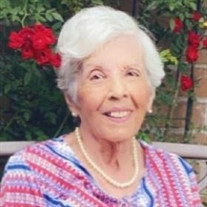 Maria Isabel Blanco “Ninina” passed away on Wednesday evening, March 16, 2022 at Trinity Trace Retirement Community in Covington, LA at the age of 97. She was born in Cienfuegos, Cuba and immigrated to New Orleans in 1968 where she resided for 18 years. She then lived in Metairie, LA for 17 years before residing in Abita Springs and then Covington for the past 15 years. Maria was a devout Catholic and a very charitable person. She was employed as a seamstress for D H Holmes for 18 years in the alterations department until she retired at the age of 62. She loved knitting and sewing and enjoyed making gifts for people. She made all of her granddaughters’ Communion dresses. She enjoyed plants and flowers, her dogs, and spending time with her family, especially her brothers and her grandchildren. Maria was a talker who never had anyone say “hello” that she didn’t have a full conversation with. Also, her telephone never left her hand. She would only panic when her phone would run out of minutes. Loving wife of the late Eduardo José Jesus Blanco for 55 years. Daughter of the late Julio Gonzalez and Maria del Carmen Camps Gonzalez. Devoted mother of Eduardo José Andrés Blanco (Ida) of Florida, Eduardo Julio Blanco (Fé), Ignacio Eugenio Blanco, and Isabel Maria Moeinian (Bahram “Bob”). Sister of Orlando Gonzalez (Irma). She is preceded in death by her brothers Julio Gonzalez (Irma), and Antonio Gonzalez. She is survived by her sister-in-law Carmen. The apples of her eyes were her granddaughters Christina Marie Blanco, Cynthia Marie Blanco, Brianne Alicia Wilson (Joshua), Alyssa Marie Moeinian, and her grandson Alejandro José Blanco. She is also survived by her great grandchildren Preston Anthony Wilson, Gabrielle Elena Wilson, Lucas Michael Saavedra, and James Edward Saavedra, as well as many loving nieces and nephews. Relatives and friends of the family are invited to attend a Memorial Mass at St. Jane de Chantal Catholic Church, 72040 Maple St., Abita Springs, LA 70420 on Wednesday, March 23, 2022 at 11:00 AM. Visitation begins at 10:00 AM. In lieu of flowers the family is requesting donations in Maria’s name to any charitable organization of the donor’s choice. Condolences and tributes can be posted at www.serenitycovington.com

Maria Isabel Blanco &#8220;Ninina&#8221; passed away on Wednesday evening, March 16, 2022 at Trinity Trace Retirement Community in Covington, LA at the age of 97. She was born in Cienfuegos, Cuba and immigrated to New Orleans in 1968 where... View Obituary & Service Information

The family of Maria Isabel "Ninina" Blanco created this Life Tributes page to make it easy to share your memories.

Send flowers to the Blanco family.