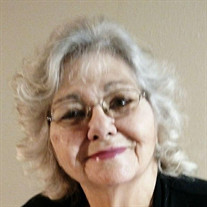 Macy Patterson-Dufour Dukes passed away Thursday, January 10, 2019 at 12:06 am at the age of 79. She was born in Macon, Georgia and moved to St. Bernard Parish in 1967. Her family says she came for Mardi Gras and never left. After being displaced by Hurricane Katrina she relocated to Slidell. Ms. Dukes was a domesticated homemaker and more than anything she loved her family, grandchildren, and great-grandchildren. Her many hobbies included being a part of the Domino Divas which was located at the First Baptist Church in Chalmette, playing bingo as often as she could with her family, going on outings, participating in Mardi Gras festivities, listening to her Christian music and watching Jimmy Swaggart on the television. Macy is pre-deceased by her parents Thelma Woodell-Patterson Smith and Joseph Elzie Patterson as well as her sister Marjorie Ann-Patterson Brai, her youngest daughter, Tracie Collette Dukes and her granddaughter Macy-Theresa Dufour. She is survived by her brother, Joseph Russell Patterson Sr. (Jackie). She is sadly missed by her children Cynthia Dufour Watermeier, Paula Dufour Belton (Carlyle), Danielle Dufour Olister, Ernest Daniel Dufour (Frances), Theresa Lynne Dufour and Michelle Dufour-Caywood Hardin. Loving grandmother of Andrew Cannatella (Amanda), Michael Chappelle (Nikki), Jessica Wilkinson (Brian), Ashley Mobley (Sean), Tyle Olister, Garrett Olister, Delany Olister, Jason Dufour (Andrea), Jeffrey Dufour (Kristen), Blake Santini (Ashley), Julia Dufour, Brittney Caywood, and Jennifer Williams (Landon). Caring great-grandmother of Thomas Cannatella, Christian Chappelle, Caleb Chappelle, Braxton Wilkinson, Bryson Wilkinson, Avery Mobley, Aiyana Santini, Jayceston Santini, and Caleb Santini. She is also missed by many nieces and nephews. We will never forget our mother’s number one saying, which was “Let’s go!” She was always prepared to go to new places and see amazing things. Family and friends are invited to attend Funeral Services on Friday, January 18, 2019, at Serenity Funeral Home, 20419 Hwy 36, Covington. Visitation from 2:30pm until 5:00pm with the Service beginning at 4:00pm. In lieu of flowers, the family has kindly requested donations be made to the American Heart Association.

Macy Patterson-Dufour Dukes passed away Thursday, January 10, 2019 at 12:06 am at the age of 79. She was born in Macon, Georgia and moved to St. Bernard Parish in 1967. Her family says she came for Mardi Gras and never left. After being displaced... View Obituary & Service Information

The family of Macy Patterson-Dufour Dukes created this Life Tributes page to make it easy to share your memories.

Send flowers to the Dukes family.