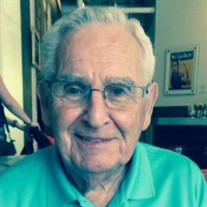 Louis M. Gavin passed away on Sunday, March 15, 2020. He was preceded in death by Norma L. Gavin, his loving wife and childhood sweetheart of 55 years. He found love again in the later years of his life and married Diane Brumfield Gavin. Son of Louis and Rose Giuliano. Loving father of Andrew D. Gavin of Mandeville La., Daniel D. Gavin of Knoxville TN., who preceded him in death, and Matthew B. Gavin of Baltimore MD, and Grandfather to Benjamin W. Gavin, Graduate of Loyola University in Chicago Il., and Madeline R. Gavin, a student at Purdue University. Brother to Joyce Garbera who resides in Coraopolis, PA with her husband Paul. Brother to the late Lawrence D. Giuliano. Lou was born in New Castle, PA. He earned a B.S. Degree from Geneva College in Beaver Falls, PA, and a M.A. in Financial Management from Loyola University in Chicago, IL. In the 1950’s, during the Korean war, he served in the U.S. Coast Guard. He was employed as a financial counselor with Household Finance for 25 years. In the final eight years of his employment he was Vice President of Training and Management Development for the consumer finance division of Manufacturers Hanover Trust. His corporate employment commitments caused him to live in seven cities in six states and for a short period of time in London, England. He moved to Louisiana in 1988 and worked as a consultant for Milliken and Michaels for Michael Sanderson. Upon his retirement he lived in Mandeville, LA until he passed away. From 1996 to 2016 he was the Program Director for the Faith Bible Church Substance Abuse Recovery Program in Covington, LA, where as a volunteer he helped men recover from drug and/or alcohol addiction. Additionally, he was a community activist. His philanthropy included serving as a board member of the Child Advocacy Center, The Youth Service Bureau, and the St. Tammany Literacy association. He appeared on stage in several productions at the Playmakers Theater. For a number of years he wrote a weekly business column for the St. Tammany News, and hosted a weekly television show “St. Tammany Business Today” on the public access channel. In lieu of flowers, the family requests that donations be sent to Covenant Church, 14985 Hwy. 1085, Covington, LA 70433 or to the National Cancer Society. Arrangements for a Memorial Service have been put on hold pending the resolution of the CoronaVirus Pandemic. Date and time of Service will be updated on the Serenity Funeral Home website when that information becomes available. Condolences and tributes can be posted at www.serenitycovington.com

Louis M. Gavin passed away on Sunday, March 15, 2020. He was preceded in death by Norma L. Gavin, his loving wife and childhood sweetheart of 55 years. He found love again in the later years of his life and married Diane Brumfield Gavin.... View Obituary & Service Information

The family of Louis Gavin created this Life Tributes page to make it easy to share your memories.

Send flowers to the Gavin family.