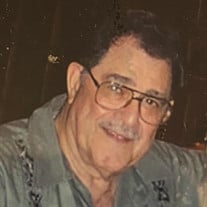 On Saturday, March 6, 2021, in Lacombe, LA, LeRoy Philip Berhel, at the impressive age of 95, joined his loving wife, Emma Jean, of 71 years, who predeceased him on January 1, 2021. He was born in New Orleans, LA, in 1925. He served in the US Army in World War II along with his brother, Alvin, both surviving D-Day, the battle of Normandy. He was a plasterer apprentice in Louisiana when he entered the army and eventually moved to California after the war where he was married in 1949 and became a journeyman plasterer extraordinaire. He then resided in Gardena, CA, for over thirty years and eventually moved back to his roots of Louisiana, living out his life in Lacombe. He was a dear father to four children, three daughters, Danielle (Len), Paulette (Tony) and Denise, one son, LeRoy, II, a loving grandfather of seven; Sean, Jennifer, Robert, Sara, Aaron, Renèe, and Gabrielle, and a great grandfather to 11. He is also survived by his sister, Barbara, 86 years of age, his godson, Martin, and many other nephews and nieces. He was known for his character, integrity, and tremendous devotion to his family. He loved cooking, Louisiana seafood, French wine, fine dining and was a true “gentleman” in every sense of the word. He will be interred at Southeast Louisiana VA Cemetery in Slidell, LA at which time Services will be held. Arrangements entrusted to Serenity Funeral Home, Covington, LA. Condolences and tributes can be posted at www.serenitycovington.com

The family of LeRoy Philip Berhel created this Life Tributes page to make it easy to share your memories.

Send flowers to the Berhel family.