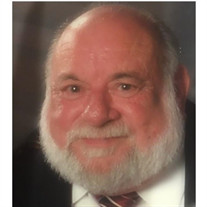 Leonard “Paul” Daigle entered into his heavenly home on Sunday, August 9, 2020 at the age of 82. He was born in New Orleans, LA and moved to St. Bernard Parish, Arabi, LA where he resided most of his life. He humbly served in the Louisiana National Guard and has declined military recognition. Prior to Hurricane Katrina, Paul was a parishioner of St. Louise deMarillac Church in Arabi. After returning home in 2007, he became a parishioner of Our Lady of Prompt Succor Catholic Church in Chalmette, LA. He enjoyed attending church each week with his family and loving wife Carol Daigle who passed in March of 2020. Paul and Carol were married 59 ½ years. Paul loved to play music and is recognized in the New Orleans Music Hall of Fame and was given a key to the City. He played with many local greats such as Al Hurt, Dr. John, and Fats Domino just to name a few. Paul was also an original member of the Pete Fountain’s Half -Fast Marching Band (Club); He recorded records such as “Hung-Up” with the band “Salt” and “Last Chance” with “COLLAY and the Satellites”. (During the recording of “Last Chance” Carol sang backup.) He also played with Art Ryder for many years. He retired as a draftsman from the City of New Orleans to pursue his fishing passion. He opened a seafood business and named it “Quality Seafood” which he sold to his partner after a few years. Paul owned several boats while in business such as “Baseman” (which was Paul’s nickname) and eventually Seahawk 1 and Seahawk 2. Paul officially retired after the BP Oil spill. He was the loving husband of the late Carol Gordy Daigle, the father of Lisa Daigle DeHarde and Cherie Daigle Barnes (Dennis). He was the son of the late Francis R. Daigle, Sr. and Carmen Tregre Daigle. Brother of the late Edmond Louis Daigle (the late Carolyn), Roy Francis Daigle (Gail), Carmen “Lady” and the late Dayton “Joe” Schexnaydre; Grandfather of Amie’ DeHarde, Candice DeHarde, David DeHarde, Jr., Emily Barnes and Colby Barnes; Great grandfather of Travis, Elijah, Mailyn and Kinley. The family extends a special thank you to all those who have assisted in his home care; especially Notre Dame Hospice Care. Relatives and friends of the family are welcomed to attend a Mass of Christian Burial on Friday, August 14, 2020 at Our Lady of Prompt Succor Catholic Church (OLPS), 2320 Paris Road, Chalmette, LA 70043 followed by the interment at St. Louis III Cemetery, New Orleans, LA. Rosary beginning at 9:30 AM, Mass will begin at 11:30 AM. If preferred, in lieu of flowers, donations can be made to OLPS Chalmette, LA. Due to the Coronavirus pandemic, masks must be worn at all times while inside the OLPS Church. We appreciate your cooperation and consideration of others. Arrangements entrusted to Serenity Funeral Home, Covington, LA. Condolences and tributes can be posted at www.serenitycovington.com

Leonard &#8220;Paul&#8221; Daigle entered into his heavenly home on Sunday, August 9, 2020 at the age of 82. He was born in New Orleans, LA and moved to St. Bernard Parish, Arabi, LA where he resided most of his life. He humbly served in the... View Obituary & Service Information

The family of Leonard Paul Daigle created this Life Tributes page to make it easy to share your memories.

Leonard “Paul” Daigle entered into his heavenly home on Sunday,...

Send flowers to the Daigle family.