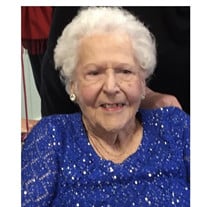 Laura Cecelia Pauli Dicharry, born January 13, 1918, passed away on May 8, 2020, at the age of 102, surrounded by her family. She was married for 23 years to the love of her life, Jacques Francis (Jack) Dicharry, owner of the Circle and Carver movie theaters, who had an early death in 1965. Laura is survived by daughters Karen Dicharry Scott (David), Patricia Dicharry Lemaire Mire (Tom), and Mary Ann Dicharry; by grandchildren David John Lemaire Jr. (Allison), Lisa Roussel (Paul), Jacques Lemaire, and Amy Scott; by great granddaughter Taylor Lemaire; and by numerous nieces and nephews. The oldest of ten children, Laura is survived by sisters Esther Lacoste and Gladiola (Duddy) Carson. She was preceded in death by her parents, Peter George and Laura Grennon Pauli; brothers Peter George Jr., Edwin Charles, Joseph Francis, Norman William, William Grennon (Sonny) infant Lawrence Valentine and her sister Catherine Rickelman. Before her marriage she did clerical work. After marrying Jack, she became a Betty Crocker-type housewife and stay at home mother of the 50’s. She took great pride in caring for her family, her house, and her yard. She was an excellent cook, an ice cream aficionado, a devotee of Coca Cola, and a card player. Born and raised in New Orleans, Laura was a sports fan partial to local teams, especially the LSU Tigers and the New Orleans Saints. She loved to watch Drew Brees and “the Manning boys.” She had been a parishioner at St. Matthias, St. Francis Cabrini, and St. Ann before residing at Brookdale and at Colonial Oaks Living Center, where she had earned a reputation for being feisty and for having a very sharp mind. Laura was delighted to be recognized on her 100th birthday with the first Centenarian Award of the Jefferson Parish Sheriff’s Office. Sheriff Lopinto and his officers brought a plaque and flowers. Officer Turner Barron made a touching “This is Your Life” power point presentation. He also returned to celebrate both her 101st and 102nd birthdays with her; they had developed a special connection. She was loved by many and will be deeply missed by her family and friends. While not a victim of COVID-19, her decline began during the resulting lockdown and isolation. Bingo had been a highlight of her day. We are sincerely grateful to the nurses and staff at Colonial Oaks Living Center for their care and attention. In lieu of flowers, the family requests donations to the American Cancer Society or American Heart Association. Due to the current health crisis, the funeral mass at St. Ann Catholic Church and the burial at Lake Lawn Metairie Cemetery will be private. Arrangements entrusted to Serenity Funeral Home, Covington, LA. Condolences and tributes can be posted at www.serenitycovington.com

Laura Cecelia Pauli Dicharry, born January 13, 1918, passed away on May 8, 2020, at the age of 102, surrounded by her family. She was married for 23 years to the love of her life, Jacques Francis (Jack) Dicharry, owner of the Circle and Carver... View Obituary & Service Information

The family of Laura Cecelia Pauli Dicharry created this Life Tributes page to make it easy to share your memories.

Send flowers to the Dicharry family.