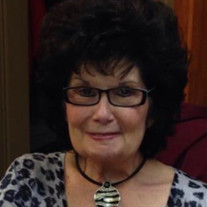 Judith Boyd Leahy was born in 1945, in New Orleans, LA, and passed away on January 13, 2021, at the age of 75. Judy was the daughter of the late John Robert Boyd, II and Dorothy Vath Boyd. She was married to William (Billy) Edward Leahy II for almost 50 years, and together they had five children. She is survived by her children, son Boyd Leahy and his wife Angelina Leahy, daughter Lisa Grab and her husband John Grab, III, daughter Shellie Herring and her husband John Herring, William Leahy, III and his wife Nicole Leahy, and son Martin Leahy. Grandchildren and their spouses; Brittany Oatsvall and her husband Brian Oatsvall, Alexis Brannan and her husband Joel Brannan, Casey Leahy, John Grab, IV, Kalli Leahy, Braden Leahy, Bailey Herring, Gabriella Leahy, William Leahy, IV, Graciella Leahy, Brock Leahy, Callahan Leahy, and Adeline Leahy; and finally two great-grandchildren; Bryce Oatsvall, and Bruin Brannan. She is preceded in death by her parents, John & Dorothy Boyd, husband, William Leahy, II, and daughter in law, Gretchen Leahy. Mom’s first love was always the Lord. She felt His hand on her life from a very young age. She loved the Lord and was active in the churches she attended. Mom was very proud of the fact all of her children knew the Lord. She often quoted the poem Footprints as she believed and lived by its message, especially in the last weeks of her life. Mom and Dad were saved and joined Crescent City Baptist Church in Metairie, LA. They later moved to Bush, LA, where they were active members of Hebron Baptist Church. At Hebron, she became affectionately known as “Miss VBS” because of her love for children and the children's ministry. When they moved to Covington, Mom and dad husband attended First Baptist Church of Covington and later Historic St. James Baptist Church, Madisonville, LA. Judy served in the children’s ministry and the women’s ministry for many years. She loved people and never met a stranger. No service will be held due to the Covid pandemic. Because of Judy’s life of ministry to women and children, her family requests donations to the Emily Martin Rescue Center in Kenya https://nowkenya.org/emily-martin-rescue-centre.html The Emily Martin Rescue Center rescues hurting women and children from violence. Arrangements entrusted to Serenity Funeral Home, Covington, LA. Condolences and tributes can be posted to www.serenitycovington.com

Judith Boyd Leahy was born in 1945, in New Orleans, LA, and passed away on January 13, 2021, at the age of 75. Judy was the daughter of the late John Robert Boyd, II and Dorothy Vath Boyd. She was married to William (Billy) Edward Leahy II... View Obituary & Service Information

The family of Judith Boyd Leahy created this Life Tributes page to make it easy to share your memories.

Send flowers to the Leahy family.