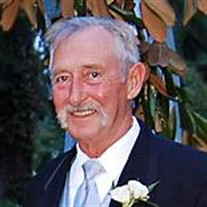 John Corbett Sparks went to be with his Savior on January 25, 2019 in Covington, Louisiana. John is preceded in death by his parents, Jeff and Lula, sister Kathleen Shiverdecker, granddaughter Jessica, nephew Michael Shiverdecker, brother-in-law Jim Patrick, and sister-in-law Judy. He is survived by his wife Janet (Plummer) Sparks and his children Luana Jo (Lemuel) Brock and Evan (Michelle) Sparks. He is also survived by his siblings Clyde (Mary Jo) Sparks, Joanna Sparks, and Reba Sparks, and brothers-in-law Dean Plummer and Harold Shiverdecker; his loving grandchildren: Leilah Tavazoie, Anjonet Brock, Bijean Tavazoie, Aaria Tavazoie, Jeni Sparks, Jackie Sparks, Jonathan Sparks, and his faithful dog, Scooter. He also had many loving nieces, nephews and 4 great-grandchildren. John grew up in Dayton, Ohio and served our country in the United States Navy during the Vietnam War, where he volunteered to fight for freedom in three tours. He was a retired USN Boiler Technician with numerous military awards and accolades. After his military service, John spent over 30 years as a valve technician, where he travelled across the country and positively impacted every person he met with his authentic, kind and loyal spirit. He loved animals and had horses, mules and many faithful dogs throughout his life. John touched hundreds of lives during his earthly journey and his gentle, loving and honorable essence will be deeply missed. A service with military honors will be held in the spring in Dayton, Ohio.

The family of John Corbett Sparks created this Life Tributes page to make it easy to share your memories.

John Corbett Sparks went to be with his
Savior on January 25,...

Send flowers to the Sparks family.