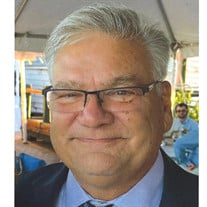 John L. Koeppen passed away on Saturday, January 15, 2022 at the age of 60. He was born in Long Beach, California. As the child of a military family, he moved to several states before landing in Terrytown, Louisiana where he was living when he graduated from West Jefferson High School. He remained in Terrytown where he started his career path with #1 Tire and Auto in Belle Chasse, Louisiana. He would later become a Specialist Service Engineer for nearly 30 years with Ulstein, and remaining as it transitioned to Rolls Royce Marine, and finally Kongsberg Maritime. John and his loving wife of 30 years moved to St. Tammany Parish where they have lived for the past 25 years. How do you capture the beautiful life of a man in a few words? John was a loving soul who cared deeply about the people around him. He was always smiling and enamored with the three girls he lived with. His wife Tyra, and two daughters Jamie and Jordyn. His work took him worldwide, but when home, he loved watching LSU and the Saints with family and friends. He was an avid Nascar fan following his beloved Dale Earnhardt, Sr. John is preceded in death by his grandparents Jackie Jackson Wahlbrink (Art), and Lloyd Jackson (Lillie). He was a loving husband to Tyra Clark Koeppen, and doting father to Jamie Lee and Jordyn Ashley Koeppen. He is survived by his parents John Hans Koeppen and Janet Jackson Koeppen, as well as his sister Janell Koeppen Averett (Mark). All of whom he loved deeply. His mother-in-law Aurelie B. Clark (the late Tyrone), his brothers-in-law Tyrone G. Clark, Jr. (Melissa), and Traig Gerard Clark (Patricia). He leaves behind three nieces Sarah Averett Jackson (Tyler), Jessica Ann Clark, Janelle Lee Clark, two nephews Traig Gerard Clark, Jr., Trevor Edward Clark, one great nephew Cody, and one great niece Avery. He also leaves behind beloved aunts, uncles, and cousins. Steve Wahlbrink (Barbara), Judy Jackson Froning-Cooper (Barry), Kathy Jackson Schmid (Greg), and all their children. John will be greatly missed and remembered fondly by all who knew him. A Celebration of Life will be held later in May. Condolences can be posted at www.serenitycovington.com

John L. Koeppen passed away on Saturday, January 15, 2022 at the age of 60. He was born in Long Beach, California. As the child of a military family, he moved to several states before landing in Terrytown, Louisiana where he was living when... View Obituary & Service Information

The family of John L. Koeppen created this Life Tributes page to make it easy to share your memories.

Send flowers to the Koeppen family.