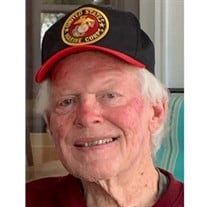 James “Jim” Taylor Sewell born in 1938, passed away on Thursday, September 17, 2020. He was 82 years old. Jim resided in Bush, Louisiana with his wife, Allanagh, and their two german shepherds, Sasha & Lilly. Jim was born in Pittsburgh, Pennsylvania where his professional baseball player father, Rip Sewell, was playing for the Pittsburgh Pirates. He was raised in Plant City, Florida, graduated from Plant City High, and attended Florida State University. He tried out for the Cincinnati Reds professional baseball team, but an injury to his shoulder kept him from qualifying. He joined the United States Marines in 1957 where he served six years. He returned home and became a Florida State Trooper until 1967. Jim worked for Gulf Oil as an investigator in Atlanta, GA from 1967 – 1980, and then transferred to the New Orleans, Louisiana office where he worked from 1980 - 1982. In 1982 he was hired as Director of Corporate Security for The Louisiana Land & Exploration Company (LL&E) in New Orleans where he met his current wife, Allanagh Daniel Sewell. After he retired from LL&E in 1994, Jim worked as a private investigator for a couple of years while tending to his farm in Bush, Louisiana where he also raised cattle and horses. Jim was an animal lover. He loved feeding the birds, sitting on his back porch that overlooked his pasture, sipping on whiskey, and enjoying time with his family, friends, and pets. Jim is survived by his wife of 34 years, Allanagh Daniel Sewell, his son, James “Skip” Sewell (Marilyn) of Mandeville, Louisiana, three daughters, Suzanne Sewell Moreno (Chris) of Daphne, Alabama, Shelby Sewell Marocco (Mike) of Lakeland, Florida, and Jamie Sewell Sites of Lakeland, Florida, as well as his former spouse, Joycelyn Joiner of Lakeland, Florida, ten grandchildren, and three great grandchildren. He is also survived by four brothers-in-law, Shannon Daniel (Julia), Fabian Daniel (Susie), Brendan Daniel (Jeannie), and Kieran Daniel (Gayle), and numerous nieces and nephews. He is preceded in death by his parents, Truett Banks “Rip” Sewell and Margaret Abbott Sewell, his brother, Truett Jackson “Jackie” Sewell, of Plant City, Florida, mother-in-law Grace C. Daniel of Abita Springs, Louisiana, and sister-in-law, Laurette Daniel Hemstad of Abita Springs, Louisiana. Relatives and friends of the family are invited to attend a Memorial Service on Wednesday, November 25, 2020 at St. Timothy's United Methodist Church, 335 Asbury Dr., Mandeville, LA 70471. Visitation begins at 10:00 AM and Service begins at 11:00 AM. Everyone is expected to wear a face covering or mask due to the Coronavirus Pandemic, and social distancing guidelines should be followed. To view online please note that when you go to it beforehand, it will look like it doesn’t work. It will only work when we go live, https://livestream.com/stumc/events/6961311 Any donations in memory of Jim may be made to the SPCA, St. Tammany Parish Humane Society, and the American Cancer Society. Arrangements entrusted to Serenity Funeral Home, Covington, LA. Condolences and tributes can be posted at www.serenitycovington.com

The family of James "Jim" Taylor Sewell created this Life Tributes page to make it easy to share your memories.

Send flowers to the Sewell family.