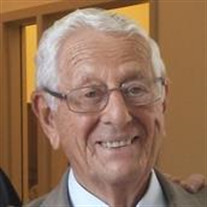 Henry Joseph De Nicola Born 7/25/1922, Called home to the Lord 5/20/2019 Survived by his children Philip (Louise), Kathy (Bill) Lancaster, Valerie (John) Englehardt, Peter (Joy), Michael (Kim), twenty grandchildren and fifty-six great grandchildren. Preceded in death by his parents, his four siblings, his son Mario and his beloved wife of fifty-five years, Kathy, and his great grandson Michael Patrick Doyle. Henry was born and raised in Mount Carmel Catholic Parish Bronx, New York, the fourth of five children born to Joseph De Nicola and Livia Castello. Artistically gifted from a young age, he contributed to the family finances by painting the prices on store windows and covering them with wonderful scenes during the Christmas season. He graduated from De Witt Clinton High School where he was a good student and an outstanding athlete. He attended Cornell University on a scholarship which he relinquished in order to serve his country, enlisting in the military and serving in the Army Air Corp during World War II. While stationed at Lowry Airfield in Denver for flight training, Henry met his future beloved wife Kathy. They were married in Boise, Idaho on April 4,1945 where he had been sent for further training. He left for the Pacific Theater a few days later and was on the crew of a B-24 Liberator as a member of the 13th Air Force. Following the war Henry and Kathy resided in Bronx, N.Y. where their first two children were born before moving to Colorado where he completed his education at the University of Denver, graduating from the school of architecture in 1952 then settling in Denver to raise their family of six children. Henry had an independent practice of architecture for over forty years with the majority of his work being for the Catholic Archdiocese of Denver where he designed numerous churches, schools, convents, rectories and retreat houses. He loved his work, did it for the Lord, and wonderfully mentored anyone with an interest or desire for the profession. Henry was a devoted member of All Saints Catholic Parish in Denver for over sixty years, filling countless roles in ministry and serving in every possible capacity. He was also an active member of the American Institute of Architects, the Lion's Club, the Serra Club, the Sons of Italy and various other organizations. Towards the end of his life he moved to Madisonville, LA to live with a daughter and became a parishioner at Mary, Queen of Peace Catholic Church in Mandeville. Henry was a devoted husband to our dear mother and an exemplary father to his children in whom he instilled a deep love of God, their faith, their family, their country, the value of service to others and a thirst for knowledge. He was a man of profound faith, great integrity, fierce loyalty, boundless energy, creativity, determination, an unquenchable desire for knowledge and a staunch defender of truth! His generous spirit and amiable (sometimes larger than life) personality were evident to all he encountered and drew people to him. He always had a song in his heart and often on his lips, singing for others up to the very end. His greatest joy was to see his grandchildren and great-grandchildren - all of those who know and love him as PAPA or GREAT PAPA carry on the faith and values he handed on to them. He was truly a patriarch to his family and a great man by any measure! How blessed we were to know him, love him and be loved by him! How we shall miss him. May he know the joy of being reunited with all of his beloved who have gone before him and may he forever rest in the loving embrace of the Triune God. Rosary and funeral Mass will be at All Saints Catholic Church in Denver, CO with interment also in Colorado. A Memorial Mass will be celebrated at Mary, Queen of Peace Catholic Church in Mandeville, LA at a later date in June. In lieu of flowers you can make a donation to the charity of your choice in Henry’s name.

The family of Henry Joseph DeNicola created this Life Tributes page to make it easy to share your memories.

Send flowers to the DeNicola family.