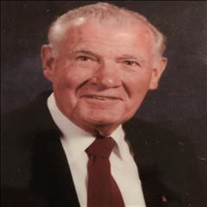 Harold Frank Parker passed away peacefully on Friday, May 4, 2018. Harold was born to James H. Parker and Viola Heck Parker. He graduated from Francis T. Nicholls High School in 1942. He then entered Tulane University that fall as a member of their freshmen football team. The next year he enlisted in the US Marine Corps, where he proudly served in the Pacific as a gunner on an SBD dive bomber off of an aircraft carrier during World War II. He also served in active duty during the Korean War. Upon returning from military service in World War II, he began his career at NOPSI in the Gas Department and he graduated from Tulane University College in 1959. He retired from NOPSI in 1988 as Superintendent of the Shops Maintenance Section of the Gas Department. Upon retirement, he vigorously worked as a volunteer for the Greater New Orleans Sports Foundation for many years.. Harold was active as a high school football official for over 40 years and served as a basketball official for 15 years. He took great joy working for the NFL as the Play Clock Operator in New Orleans from 1974 through 2009, including working 6 Super Bowls held in New Orleans. He also served in a similar capacity for Tulane football and basketball for 24 years. Harold was also active in Toastmasters International for nearly 50 years and served as District Governor, as well as forming over 25 new clubs. Harold was also a devoted attendee of the Manresa House of Retreats in Convent, La. He attended Manresa annually for over 40 years and was active in their First Friday masses over the same time period. Harold was married to Joyce Couget Parker, his beloved wife, for over 68 years. He was a devoted father to his son, Paul Craig Parker, MD (Cathy) and a proud and devoted grandfather to Paul Couget Parker and Catie Parker McDaniel (Michael). He is preceded in death by his father, James H. Parker, his mother, Viola Heck Parker, his brother Sgt. Major James Parker, USMC and his sister, Gertrude Parker Morise. Relatives and friends are invited to attend a Memorial Mass on Monday, May 14, 2018, at Most Holy Trinity Catholic Church, 501 Holy Trinity Drive, Covington . Visitation is at 10:00 AM and all are invited to the Memorial Mass at 11:00 AM. Arrangements entrusted to Serenity Funeral Home, Covington.

Harold Frank Parker passed away peacefully on Friday, May 4, 2018. Harold was born to James H. Parker and Viola Heck Parker. He graduated from Francis T. Nicholls High School in 1942. He then entered Tulane University that fall as a member of... View Obituary & Service Information

The family of Harold Parker created this Life Tributes page to make it easy to share your memories.

Harold Frank Parker passed away peacefully on Friday, May 4,...

Send flowers to the Parker family.