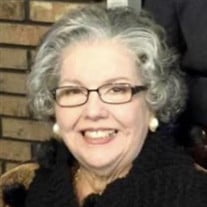 Geraldine “Geri” Barbier Zauner passed away at the age of 85 on Saturday morning, August 15, 2020, surrounded by her family. She is preceded in death by her one and only true love, her husband of 61 years, Richard “Dick” Zauner, Sr.; son, Michael Zauner; mother, Mabel Raftery Barbier; father, George Barbier, Sr.; and brother, George Barbier, Jr. Mrs. Zauner is survived by her son, Richard Zauner, Jr., and daughter, Susan Zauner Carter. Known as Mawmaw and adored by her grandson, Chad Carter. Family was the most important thing to her, and she was blessed with a large extended family, including cousins, nieces and nephews that she adored with all of her heart. Mrs. Zauner was born in New Orleans, Louisiana in 1935. She lived in Sulphur, Louisiana during her adolescent years and graduated from Sulphur High School in 1953. Geri and Dick moved to Baltimore, Maryland, where they began their family, but returned home to New Orleans where they remained the rest of their lives. Mrs. Zauner was a devoted mother, wife, and Catholic. Her hobbies included crafts, sewing, cooking, and spending time with her family. Mrs. Zauner was an avid Genealogy buff having researched, not only her immediate family’s history, but that of extended family and friends as well. She even taught a class on Genealogy at Holy Cross College before it was even popular. Geri was a proud Yugoslav-American and belonged to the Yugoslav-American Society for many years. A private burial will be held at Hope Mausoleum. Due to COVID, a Memorial Service to celebrate her life will be held on a later date. Arrangements entrusted to Serenity Funeral Home, Covington, LA. Condolences and tributes can be posted at www.serenitycovington.com

The family of Geraldine "Geri" Frances Barbier Zauner created this Life Tributes page to make it easy to share your memories.

Geraldine “Geri” Barbier Zauner passed away at the age of 85...

Send flowers to the Zauner family.