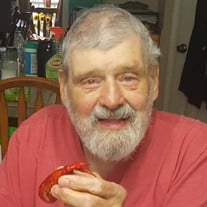 The world lost a wonderful husband, father, and grandfather on Saturday, October 17, 2020 who is now dancing with his Heavenly Father. Gerald Jerome “Jerry” O’Mara is known by many people for many reasons, but he is mostly known for his passion for others and how much he loved his family. Jerry was born in 1941 in Harbor Beach, Michigan. He studied at Villa Majella Training School for the Redemptorist Fathers in Pine City, Minnesota. After leaving the Novitate he enlisted in the United States Navy in 1960, Air Traffic Control. In his words, in 30 days he “went from Men of God to the godless men”. He had multiple enlistments including reserve time. He loved aviation. His duties included Flight Clearance Supervisor and Aviation Maintenance Administrator. He finished his military services as 2nd Class Petty Officer. His last enlistment brought him to USN Belle Chasse where he met and married Carmen Catalanotto Bourgeois. Among the medals he received are the Good Conduct, National Defense Service Medal, and Naval Reserve Meritorious Medal. Carmen and Jerry were married in 1977 having celebrated 43 years of marriage in 2020. They practiced their faith at St. Joseph the Worker Catholic Church in Marrero, living on the Westbank for over 25 years. Donald Bourgeois, Jr. had no coach at King’s Grant playground for baseball. Jerry “stepped up to the plate,” and was willing to coach, knowing nothing about coaching or about baseball. It was in Marrero that he found recovery from alcoholism and became a friend of Bill W. and Dr. Bob, in December, 2020 would be 42 years of sobriety. After unpacking his Seabags, of which he “never went to sea”, he studied and earned his Engineer’s Certificate, Air Conditioner, and Boiler’s Certificates. He worked for years as a building operating engineer for Capital One Building (formerly Place St. Charles). During those years he would dutifully, maybe even grudgingly, put up with Mardi Gras parades for his family, leaving wonderful traditions and memories for those he has left behind. Truth be told he could be seen scampering for beads when he did not think any one was watching him run. Jerry was an avid Saints fan, who was known for having to go outside to scream when the Saints played poorly. He loved watching the purple and gold LSU Fighting Tigers. He spent years with Boy Scouts as a leader on the Westbank and Troop 310 on the Northshore. Jerry helped others, setting an example of how to treat those around him by greeting individuals with disabilities with acceptance, courtesy, and respect. He was truly a “DADVOCATE” for individuals with disabilities. He lived the scripture of “whatever you do to the least of my brothers that you do unto me.” His final years as a hard-working family man determined to provide was at SAM’S Club in Covington. He started out in the gas station, then as a people person became a greeter inside the store then finished where he was again needed in the gas station. He was grateful for the acknowledgment of his time from SAM’S serving his country honoring him with a brick in his name at the WWII museum and multiple certificates for his service in the Navy, more than his country did, which hurt him deeply for the struggle to get anything. He was well liked by associates and members as well. He was an active member of the Monday Night Disciples Men’s Charismatic prayer meeting at Most Holy Trinity Catholic Church. He was a devout Catholic and spent many years in the Charismatic Renewal at the Center of Jesus the Lord in New Orleans; he was a parishioner of Mary Queen of Peace in Mandeville. Jerry is preceded in death by his parents Lawrence O’Mara (Bratenahl, Ohio) and Rita Gentner O’Mara (Ruth, MI), as well as his brothers Charles O’Mara, Robert O’Mara, and Richard O’Mara. He is survived by his wife, Carmen and his children Christopher O’Mara, Donald Bourgeois (Gina), Douglas O’Mara and Kelly Baucum (John), and an estranged daughter from Michigan. He leaves behind three grandchildren, Molly Bourgeois, Madelyn Bourgeois, and Wyatt Baucum. He is also survived by his two sisters, Judy Chenier and Susan Rees. Thank you to Dr. Farhad Adulli, NP Jeff Kitch, DaVita Dialysis Unit and Lakeview Regional Medical Center et.al for their care navigating his multiple health challenges to give us more time together. Relatives and friends of the family are invited to attend a Funeral Mass on Friday, October 23, 2020 at noon. Visitation will be held beginning at 10:30 AM until Mass starts at Noon, at Mary Queen of Peace Catholic Church, 1501 W. Causeway Approach, Mandeville, LA 70471. Celebration of Life and Mass led by Father Beau Charbonnet. Following cremation Military Honor Guard and Inurnment will be held at Southeast Veterans Cemetery in Slidell, LA on Wednesday, November 4, 2020 at 11:00 AM. Please respect Social Distancing and wear a mask to celebrate Jerry’s life. Masses or memorial donations to his Recovery program of choice, CCRNO-Charismatic Community-Center of Jesus the Lord, or Mary Queen of Peace Catholic Church. He wanted his life celebrated, “no tears, no wienie roast.” Arrangements entrusted to Serenity Funeral Home, Covington, LA. Condolences and tributes can be posted at www.serenitycovington.com

The world lost a wonderful husband, father, and grandfather on Saturday, October 17, 2020 who is now dancing with his Heavenly Father. Gerald Jerome &#8220;Jerry&#8221; O&#8217;Mara is known by many people for many reasons, but he is mostly... View Obituary & Service Information

The family of Gerald Jerome "Jerry" O'Mara created this Life Tributes page to make it easy to share your memories.

The world lost a wonderful husband, father, and grandfather on...

Send flowers to the O'Mara family.