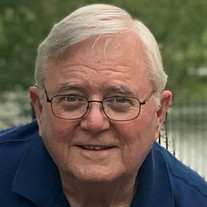 George William Grashoff, Jr. was called home to be with Jesus on Monday, June 7, 2021, in Slidell, Louisiana. He was 74 years old and was surrounded by his loving wife and children. George was born in New Orleans, Louisiana in 1946, and resided in Slidell. As a young child, you could always find George fishing with his grandfather at Lake Catherine. He was talented in sports and especially loved baseball and bowling. George was a native of New Orleans and a resident of Slidell. He graduated in 1964 from Jesuit High School and attended college at the University of New Orleans. He was an honorable rifle sharpshooter in the U.S. Army Reserves. George was a humble, loyal, and faith-filled man who had a spirited and joyful sense of humor. He was a wonderful entrepreneur and business owner who devoted most of his time and energy to members of his community. George spent much of his early adult life in the pharmacy business. He was the executive manager of Perry’s and later owned Slidell Discount Pharmacy, which was a great success. George modeled impeccable character and work ethic for all his employees. He was known for his kind and generous personality which greatly impacted all who were blessed to know him. After retiring from the pharmacy business, George opened a wild bird and supply/gift shop retail business, Genie’s Backyard Bird Cottage, to better serve his community of nature lovers, just like himself. The opening of this business was inspired by George’s youngest daughter, Genie, who was born with Down Syndrome. This unique business provided Genie with a secure and safe job opportunity every day. Genie’s Backyard Bird Cottage was always a warm and inviting place to visit, shop for unique gifts, learn about wild birds and nature, or just have a cup of coffee with George, Pat, and Genie. George loved to spend quality time visiting with and educating customers on anything and everything related to attracting, feeding, and identifying wild birds. His knowledge and expertise were extensive and impressive. George devoted his entire life to his wife and 4 daughters. His most cherished memories were trips to Navarre Beach and Disney World with his family. He had a true love for Christmas and was very well known for his elaborate, interactive home decoration display every year, which attracted viewers from far and wide. Last but not least, during his younger, vibrant years, George never turned down an opportunity to host crawfish and crab boils and drink cold beer while celebrating life or special occasions with family and friends. George was an incredibly caring and giving father and husband who was always willing and ready to help and serve anyone in need. He truly lived a life of constant sacrifice for his family and would give anyone the shirt off his back! Undoubtedly, George’s greatest purpose and passion in life was adoring and caring for his most precious love, his wife, Patricia (who he met in 4th grade at the age of 10), and his youngest daughter and little side kick, Genie. George is survived by his loving wife of 50 beautiful years, Patricia Anderson Grashoff. He is also survived by his 95-year-old mother, Ellen Lennox Grashoff. He is preceded in death by his father, George William Grashoff, Sr., his grandmother, Ellen Althea Lennox, and his grandfather, Julius Jacob Lennox. George was a devoted and loving father of 4 daughters: Cindy Grashoff Owen (Robert), Julie Grashoff Granata (Michael), Wendy Grashoff Alonso (Carlos), and his special little side kick, Genie Marie Grashoff. George was the oldest of 4 children. He was the brother of Gayle Grashoff Perry, Terry Grashoff Chisholm (Lawrence), and Gary Grashoff (Elizabeth). George was an incredible grandfather of 6 beautiful grandchildren: Tommy Kramer, Emmerson, Lilly, and Grayson Alonso, Catherine Owen, and Kate Granata. Relatives and friends of the family are invited to attend a Celebratory Memorial Mass on Tuesday, June 22, 2021 at 12:00 Noon. Family and friends visitation: 11:00 AM until Noon. Location: Our Lady of the Lake Roman Catholic Church. Address: 312 Lafitte St., Mandeville, LA 70448. Inurnment at St. Joseph Abbey will be private. The family would like to send a special and heartfelt thank you to Bedford Care Center of Picayune for their care, compassion, and support, as well as the Hospice House of Slidell for the wonderful care and support they provided during George’s last weeks. In lieu of flowers, contributions in memory of George W. Grashoff, Jr. may be made to the Hospice House of Slidell: 141 Pleasant Drive Slidell, Louisiana 70460; (985) 643 5470. Arrangements entrusted to Serenity Funeral Home, Covington, LA. Condolences and tributes can be posted at www.serenitycovington.com

George William Grashoff, Jr. was called home to be with Jesus on Monday, June 7, 2021, in Slidell, Louisiana. He was 74 years old and was surrounded by his loving wife and children. George was born in New Orleans, Louisiana in 1946, and resided... View Obituary & Service Information

The family of George William Grashoff Jr. created this Life Tributes page to make it easy to share your memories.

George William Grashoff, Jr. was called home to be with Jesus...

Send flowers to the Grashoff family.