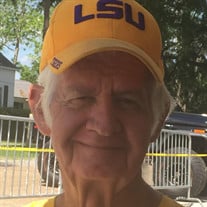 George Arthur Cleveland, age 75, passed away on Thursday, January 23, 2020 after a short battle with pancreatic cancer. He grew up in Alexandria, LA and graduated from Bolton High School. He attended LSU in Baton Rouge, majoring in mechanical engineering. He married Linda Bradshaw in 1967, and lived in Baton Rouge for a short time before traveling and living overseas in Japan and Holland where he designed and built naval barges for shipyards. When he returned to the states, he and Linda resided in Kenner, LA where they raised their family. He eventually became self-employed with George’s Repair Service. His lifelong hobby was building and flying model airplanes at State, National, and World competitions. He was “Pawpaw” to his grandchildren and “Bubba” to his siblings. He loved LSU football, faithfully attended sporting events that his grandchildren participated in, and loved taking them fishing. He was a genuine man, who always put his family first; and left an incredible impact on all who knew him. George is preceded in death by his mother, Parthena “Pat” Cleveland, his father, Arthur Jackson Cleveland, and younger sister Nancy Ellen Pickren. He is survived by his loving wife, Linda Bradshaw Cleveland; son, George Mitchell Cleveland; daughter, Kristyn Cleveland Wisecarver; grandchildren, Ashley Cleveland, Justin Cleveland, Samantha Wisecarver and Matthew Wisecarver. He is also survived by his sister, Carolyn S. Scheerer; numerous nieces, nephews, cousins and his best friend/combat-flying buddy since the 1960’s, Richard Stubblefield. Friends and family will always remember George for his kindness, selflessness and love of his family. He will be forever missed. A private Service will be held at a later date. Arrangements entrusted to Serenity Funeral Home, Covington, LA. Condolences and tributes can be posted at www.serenitycovington.com

George Arthur Cleveland, age 75, passed away on Thursday, January 23, 2020 after a short battle with pancreatic cancer. He grew up in Alexandria, LA and graduated from Bolton High School. He attended LSU in Baton Rouge, majoring in mechanical... View Obituary & Service Information

The family of George Arthur Cleveland created this Life Tributes page to make it easy to share your memories.

Send flowers to the Cleveland family.