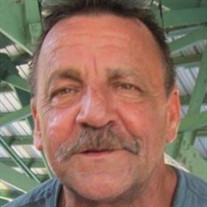 Gabriel Anthony Motichek was born on October 22, 1959 and passed away on February 20, 2022. He was a lifelong resident of Madisonville, LA. Gabe started working in the shipyard in Madisonville, but he later earned the title “Master Carpenter.” He was preceded in death by his parents, George and Antonia Motichek. He is survived by his siblings, Helen Wilson, George “Bobby” Motichek, Francis Motichek, and Pauline Smith, who all cared for him dearly. He had two daughters, Rebecca Motichek and Amy Serigny, that loved him more than words can say. He was known as “Pawpaw” to six grandchildren, Peyton Motichek, Kendall “Willie” Wilson, Jr., and James III, Jacob, Annmarie, and Daniel Serigny. Gabe was a very talented man and amazing cook, which is a trait he received from his beloved mother. He often cooked the catch or hunt of the day, most notably boiled crawfish, gumbo, and grilled mahi mahi. So, he often joked with Mawmaw Toni that he cooked possum for dinner. Gabe was a friend and family to Morton’s Seafood and Dawn Davis, as well as the whole Morton’s team, since opening in 1985. He was a master of all trades and loved by so many in Madisonville and beyond. Gabriel is irreplaceable in so many ways. Rest in Peace, Gabe. Family and friends are invited to attend a Funeral Service on Wednesday, March 2, 2022 at 1:00 pm located at Serenity Funeral Home, 20419 LA-36, Covington, LA 70433, with visitation starting at 11:00 am until service time. In lieu of flowers, please consider a donation to Bridge House / Grace House online at https://www.bridgehouse.org/support-us/donate/ or donations can be mailed to 4150 Earhart Boulevard, New Orleans, LA 70125 – Attn: Kevin Gardere

Gabriel Anthony Motichek was born on October 22, 1959 and passed away on February 20, 2022. He was a lifelong resident of Madisonville, LA. Gabe started working in the shipyard in Madisonville, but he later earned the title &#8220;Master Carpenter.&#8221;... View Obituary & Service Information

The family of Mr. Gabriel Anthony Motichek created this Life Tributes page to make it easy to share your memories.

Gabriel Anthony Motichek was born on October 22, 1959 and passed...

Send flowers to the Motichek family.