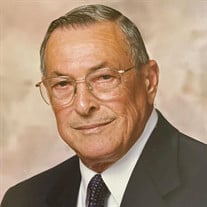 “Plenus annis abiit, plenus honoribus.” Fred Lem Yarbrough Clark died June 16, 2021 after a brief illness. A native of Coushatta, Louisiana, Fred was born in 1931. An avid learner he sped through school and was graduated from nearby Northwestern State University in Natchitoches at the age eighteen. He had to put his career on hold to serve his country during the Korean Conflict. While stationed at Kaiserslautern, Germany his assignment included teaching fellow soldiers, most of them older and more senior in rank. After being honorably discharged, he married Nellie Janice Rambin, the prettiest girl in DeSoto Parish in 1951 and went on to earn a graduate degree in Education. Things went well for the young couple. Fred began his corporate career with Agriculture Chemicals of Dallas, Texas. He was assigned to their office in Llano, Texas. It was there the young couple welcomed their first child Rebecca. Promotions followed and Fred was soon transferred to their Ft. Stockton, Texas location and made general manager. Their two boys Joe and Neal were born shortly thereafter. Fred relocated his family to Baton Rouge, Louisiana in the early 1960’s having been hired by a finance company then known as American Republic/Fidelity National Corporation. He served as a Director and Treasurer. While there, he sat for and passed the Certified Public Accountant exam on his first attempt. In 1968 Fred began a long career in the sugar cane business. He served as Director and Treasurer of Cinclare Sugar Plantation in Brusly, Louisiana and then President and CEO of Sterling Sugars in Franklin, Louisiana. At Sterling, he directed significant expansions in the farming and milling operations, processing record cane tonnage on a near annual basis, while keeping order among a diverse and colorful board of directors. Following his retirement from Sterling Sugars, he was tapped by new Governor M.J. “Mike” Foster, Jr., and confirmed as Chairman of the Louisiana Parole Board, where he served with distinction for eight years. He returned to his Alma Mater as Executive in Residence for the College of Business. He was also made a faculty member (Associate Professor of Accounting) and when not teaching classes he was raising money. Northwestern honored Fred with induction into the “Long Purple Line”. Along the way, he served as a Director of Commercial Bank in Franklin, Louisiana, President of the American Sugar Cane League, and King Sucrose XLIX. Fred was an entrepreneur, with ownership in finance companies, fencing establishments and numerous rental properties. Fred was the second son of William Ernest Clark, Sr. a supervisor for a farming concern and Lummie Flanagan a homemaker. He was preceded in death by his parents, his brother William E. Clark, Jr. and his wives Louise then Vivian. Fred’s wife of 68 years died in 2019. His children Rebecca Arivett (Jerry), Joseph Clark (Scootie), and Neal Clark (Carmen) all survive him as well as grandchildren, Joshua Arivett (Robin), Madeleine Aldridge (Ryan), Alexandra Clark, Richard Clark and Mary Catherine Anderson (Conrad) and great-grandchildren Adaleigh and Jack Arivett. Fred was a voracious reader and curious about all things related to the human condition. His passionate devotion to others was often masked behind a forbidding exterior and memorable poker countenance, punctuated only by his exceptionally dry wit. He favored straw hats and was almost never without a cigar. He gave 100% into everything he did, and respected everyone who gave life their best efforts. Through his lifelong hard work, he was able to provide for his family and countless others who deserved a chance the better themselves. Ever the number one fan of his children and grandchildren, he and Nell would drive hours after work to see them compete and participate in school activities. He fiercely believed in education and the inherent goodness of the human race, steadfastly refusing to give up on those who may have stumbled along life’s road. Those wishing to honor Fred’s memory may consider a donation to College of Business, Northwestern State University, 114 Russell Hall, Natchitoches, Louisiana 71497 or The Hospice House, Post Office Box 5806, Slidell, Louisiana 70469. Service for Fred Clark will be Friday, July 9, 2021 at 11:00 am at the First Baptist Church, 2000 Alonzo St., Coushatta, LA 71019. Condolences and tributes can be posted at www.serenitycovington.com

&#8220;Plenus annis abiit, plenus honoribus.&#8221; Fred Lem Yarbrough Clark died June 16, 2021 after a brief illness. A native of Coushatta, Louisiana, Fred was born in 1931. An avid learner he sped through school and was graduated from... View Obituary & Service Information

The family of Fred Yarbrough Clark created this Life Tributes page to make it easy to share your memories.

Send flowers to the Clark family.