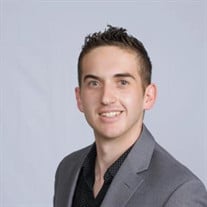 Our beloved son, brother, friend and uncle, Eugene Francis Rascoll III, entered into eternal peace on Monday January 7, 2019, at the age of 27. Loving son of ever loving parents Gena and Howard Rascoll. He journeyed through life with his siblings Hunter Rascoll and Summer Rascoll-Jones. He spent his childhood years in Mandeville, Louisiana with many lifelong friends. He finished high school in Reeds Spring, Missouri and went on to achieve his Bachelor’s degree from Missouri State University. These two experiences gained him many strong friendships. He led Sigma Nu fraternity as commander in 2014, helping to grow and strengthen their brotherhood. Gene’s brotherly love extended to everyone he met, as to him there were no strangers. He helped people through his insurance career and raising spirits of all customers at Gene’s Po-Boys, where he was known as Gene 3. He walked through life with immense passion for everything he did and everyone he loved. This included a strong love for the Saints, Harry Potter and quoting movies. He is proceeded in death by his grandmother Drucilla 'Sid' Rascoll, his Aunt Ada Mangin, Aunt Ann 'Annie-T' Weeks, his uncles Pat Gooch, Virgil Weeks, David Elliot, David Rascoll, Todd Theriot, his grandfather Eugene Rascoll Junior, his friend Dillon Dean and many other loved ones. He is survived by a countless number of family and friends including his mother Gena, Father Howard, brother Hunter, sister Summer, niece Raegan, grandmother Ilys "Meme" Peterson, grandfather Eugene Theriot, uncle Gene Theriot, brother in law Chris, Godfather Tommy Elliot, Godmother Joan Coulon, three step-nephews and Goddaughter Scarlett Strazzinski. Relatives and friends of the family are invited to attend Funeral Services at St. Timothy United Methodist Church, Mandeville on Tuesday January 15, 2019, at 10:00am with the Service beginning at 11:00am. Immediately following the service, Gene will be laid to rest at St. Patrick #2 Cemetery, New Orleans. Arrangements entrusted to Serenity Funeral Home, Covington.

Our beloved son, brother, friend and uncle, Eugene Francis Rascoll III, entered into eternal peace on Monday January 7, 2019, at the age of 27. Loving son of ever loving parents Gena and Howard Rascoll. He journeyed through life with his siblings... View Obituary & Service Information

The family of Eugene Francis Rascoll III created this Life Tributes page to make it easy to share your memories.

Send flowers to the Rascoll family.