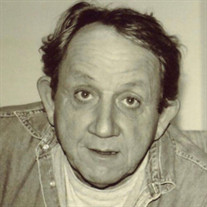 Ernest Edward “Ernie” Dopp, passed away peacefully on Friday, November 22, 2019 after a long fight with dementia. He was 77. He passed away exactly as he wanted, at home, in his bed. Longtime friend of Jackie Brockmeyer. Dear brother of Jan Moran (Rosemarie). Much loved father to Jolene Garcia (Steven), Colinda Burke (Ryan), and Addie Evans (Kirk). Uncle to Jordan. Grandfather of Lain, William, Gaston, Sebastian, Logan, Mathilda, and Sean. Former husband to Joan Burns and Nora Scott/Dopp/Lauland/Fricia/Gatch. Preceded in death by his toddler son, Ernest Frederick Dopp III, his parents, Ernest Frederick Dopp, and Emma Reulet Dopp, and his infant brother, Ernest Frederick Dopp II. Ernie was born in 1942 in New Orleans, La. He was on the “NORD All Stars” (105 lbs. Division) Louisiana state champions football team which further won the Toy Bowl in Mobile, Al in 1957. He attended East Jefferson High School and served honorably in the USN Reserve, NAS New Orleans 1960-1964. He said he enlisted to get the “sailor suit” to wear at Pontchartrain Beach. He learned welding at Delgado Trades and Technical Institute and worked for many years as a pipeline welder for multiple local, offshore, and overseas employers “because before the oil crunch in the 80’s, the WELDERS ran the show”. In 1976, he moved to Abita Springs, La, and in the 1990’s he began working for St. Tammany Parish as a Trace Ranger for the Tammany Trace until retirement. The ranger position gave him an outlet to converse with many Trace patrons. He could talk with anybody for hours. He enjoyed retirement, often proclaiming, “Life is good!” Ernie volunteered as Santa Claus and the Easter Bunny for the Town of Abita Springs for many years and was the popular “Can Man” character for many Halloweens in Abita Springs. He had numerous hobbies, but most notably he restored a large collection of vintage bicycles and built several theme bicycles. The Louisiana Bicycle Festival held annually in Abita Springs was founded specifically to connect Ernie with other vintage bicycle enthusiasts. He was on a first name basis at the local Goodwill and Habitat for Humanity Restore. Many of his belongings still bear the thrift store price stickers despite being on display in his home because as he explained, he “liked to know what he paid for something.” He liked to boast that his first wife was a Playboy Bunny and about his 1957 Thunderbird which he drag raced throughout the 1960’s and he somehow managed to hold onto through two divorces and with the windshield intact, miraculously. He claimed to double date once with Al Copeland who rode with his date being towed behind Ernie’s car because Al didn’t have a motor in the car at the time. He was a born tinkerer and the scent of WD-40 will always remind us of dad. He liked Mama D’s Pizza, a good ice cream snowball, and a big tray of crawfish when the price dropped enough. He liked laughing with his children while keeping warm around a burn pile in his yard. He looked forward to Abita Springs and Covington Mardi Gras parades every year. He was a fixture in now-closed Rauch’s Grocery with the coffee crowd. He absolutely loved local political controversy and revered former Louisiana governor Edwin Edwards. He was obsessed with D.B. Cooper and always checked his $20 bills for “Cooper serial numbers”. Early on, he missed the chance to marry the love of his life and the regret gnawed at him throughout the rest of his days. She survives him, happily married, and though unnamed here she knows who she is. Music was important to Ernie. He loved New Orleans rhythm & blues, delta blues, outlaw country, and specifically local creole bluesman, Amedee Frederick. His favorite song was Willie Nelson’s “Blue Eyes Crying in the Rain”. Friends are invited to share their memories of our father at a Memorial planned for December 7, 2019, 6:30-8:00 pm at the Mystery House (UCM Museum) in Abita Springs. Interment will be private. In lieu of flowers, please consider donating in Ernie’s memory to Mary Bird Perkins Cancer Center, Alzheimer’s Association, or the Northshore Humane Society. “Some day when we meet up yonder We'll stroll hand in hand again In a land that knows no partin' Blue eyes cryin' in the rain” Arrangements entrusted to Serenity Funeral Home, Covington, LA. Condolences and tributes can be posted at www.serenitycovington.com

Ernest Edward &#8220;Ernie&#8221; Dopp, passed away peacefully on Friday, November 22, 2019 after a long fight with dementia. He was 77. He passed away exactly as he wanted, at home, in his bed. Longtime friend of Jackie Brockmeyer. Dear brother... View Obituary & Service Information

The family of Ernest Edward "Ernie" Dopp created this Life Tributes page to make it easy to share your memories.

Send flowers to the Dopp family.