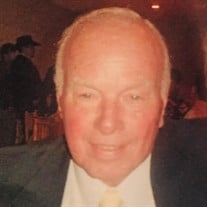 Donald “Don” Edward Bennett, Jr. was born in 1940 and passed away on Sunday, February 28, 2021 at the age of 80. In the year of 1940, many great things happened! 1. Penicillin was used to cure diseases. 2. Morton salt was introduced. 3. The First synthetic rubber tires were made. 4. Tiffany’s in New York City was the first fully air-conditioned store. 5. The Jeep made its debut. 6. M&Ms were made for the U.S. Army. 7. Donald Edward Bennett, Jr. was born! A Great Man requires many words! Donald Edward Bennett, Jr. was born and raised in Detroit, Michigan. In his teens he served in the Air Force at the San Antonio base and Fairbanks, Alaska. While in the Air Force he took up bowling for the Air Force and was very good at it. He continued his passion for the sport well into his 70’s. In that time he bowled EIGHTEEN 300 games and is inducted into the Slidell Bowling Hall of Fame. He had many hobbies in his life that included boats, and older model cars and specifically Corvettes! He also found a passion in the challenging sport of golf in his forties. He continued to play this sport until kidney failure made it impossible to continue. One of the best times, and his favorite memory is of his monthlong guy trip, playing the BEST 100 golf courses in the world! You may even say he was a pioneer in the crazy tie department when he proudly wore his crazy hole in one tie in Scotland, before those kinds of things actually becamea thing! Boy did all the Scots love his tie and even took pictures with him! His business adventures are what brought him to Metairie, LA, and it is also the place where he met the love of his life Peggy C. Slater. Together they started their company Disposable Medical Products, this entrepreneurial spirit along with his and her crew of children found them traveling to California, Louisiana, Arizona, Nogales Mexico, and Shin Tao China. After retirement, he settled with his wife of 48 years in Slidell, LA, and then to Up North Michigan. Many beautiful happy memories have been made in his eighty years on earth. He was about 5’7” in stature but he was most definitely 10 feet tall in life! He was a man’s man, old school, believed it was his duty to be a provider, teacher, and disciplinarian. Don was a giver in all things and believed in the goodness of others. He was the first person to give the shirt off his back (literally) if someone was in need of it, and NEVER expected anything in return. He stated many times that if at the end of life, you can count your friends on ONE HAND then you have succeeded well. As a testament to his love of life and his giving nature, he would have needed MANY HANDS to count all his Great friends! During his life he belonged to many organizations such as the Elks Lodge of Slidell, and is a current member of the American Legion and the Eagles Club of Comins, Michigan. In his last days, he said he wished he had more time, but it didn’t look like it was going to work out that way. Then he looked off in deep thought and said, “but I have had a great life, I’m so extremely proud of all my children, my grandchildren, and great grandchildren! I am very blessed”, he said with a smile. Don loved the Lord and his church family, the Lord said it was time for him to come home and rest! With his sad passing he leaves here on earth his Loving wife Peggy C. Bennett, and five children; Donald Troy Bennett (Darlene Borchers Bennett), Christopher Gary Bennett, Tammy Lee Frederick (Darren G. Frederick, James Warren Bennett (Carolyn Porter Bennett), and Anne Monique McCabe (Elton M. McCabe, III), 18 grandchildren, and 21 great grandchildren. He is preceded in death by his parents Donald Edward Bennett, Sr., and Beatrice Frida Bennett, and his only brother John Gary Bennett. A Memorial Service will be held in his honor on Saturday, March 13, 2021 at the Carr Drive Firehouse Community Center, 267 Debbie Dr., Slidell, LA 70458. Arrangements entrusted to Serenity Funeral Home, Covington, LA. Condolences and tributes can be posted at www.serenitycovington.com

The family of Donald "Don" Edward Bennett Jr. created this Life Tributes page to make it easy to share your memories.

Send flowers to the Bennett family.