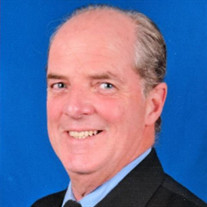 Darren Mark Jones passed away suddenly on Saturday, September 18, 2021 surrounded by family and friends. He was 61 years of age. Growing up in Bucktown, his father taught him all about hunting, fishing, and boat building. A longtime resident of Abita Springs, LA Darren retired from the New Orleans Fire Department after 35 years of faithful service. He is survived by his wife of 20 years Norma Jean Zappula Jones, their daughter Faith, his son Devin and daughter-in-law Nicolette, his grandson Dre Jones LeBlanc, his mother Beverly, his sister Darlene, his sister Deidre and brother-in-law Mike Gowland, his brother Numa, III and sister-in-law Jill, along with numerous nieces and nephews all rounding out the Jones clan. Norma’s family loved Darren as a son. They include his in-laws Gasper “Zap” and Anita Zappula, along with Anita’s daughter Heather and brother in-law Ricky Felton, and their children Riley and Hunter. He is preceded in death by his daughter Dara Jones, his father Numa Jones, Jr., his sister Dianne Sue Ellis, his mentor and closest friend Harold Maxie, and his beloved lab Belle. Darren used his God given skills as a handyman to tirelessly help his family and friends with an eager heart. He did not know how to say “no” to anyone who needed help, and he never met a stranger. One morning while being off duty he saved a young man’s life and later received from the New Orleans Fire Department a Commendation Award for his actions. He had a talent for building boats and his passion was hiking in the mountains of Colorado to hunt elk and mule deer. For many years he and his wife enjoyed camping in the snow and adventitious road trips across the country together. These trips created many fun and unforgettable memories. He loved to bake “killer” brownies and cook breakfast. His kids and their friends would call him the “Best pancake maker” ever! He had many “one liners” to make you think and or laugh. One of his favorite sayings to his kids, when a challenge would arise, was “Do you know how to eat an elephant? One bite at a time.” His devotion to his family and his ability to make everyone laugh will continue on with his memories. Darren, we will forever love and miss you! Relatives and friends of the family are invited to attend his Funeral Service at Trinity Church, 19380 N. 10th St., Covington, LA 70433 on Wednesday, September 29, 2021. Visitation begins at 1:30 PM, and Service begins at 3:00 PM. Following the service please join us to celebrate Darren’s life next door in the fellowship room. Condolences and tributes can be posted at www.serenitycovington.com

Darren Mark Jones passed away suddenly on Saturday, September 18, 2021 surrounded by family and friends. He was 61 years of age. Growing up in Bucktown, his father taught him all about hunting, fishing, and boat building. A longtime resident... View Obituary & Service Information

The family of Darren Mark Jones created this Life Tributes page to make it easy to share your memories.

Send flowers to the Jones family.