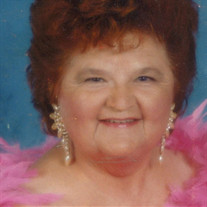 Darline Juanita Jones Smith Reynolds passed away quietly at her home on December 23, 2018, in Covington at 11:38pm. She had been having many falls in 2018. The last one was very serious and caused a subdermal hematoma that bled for many hours before she was able to get to the hospital. After emergency brain surgery and long hospital stay she was sent to Heritage Manor Nursing Home. She came home to us in September where she passed away. She was married to John N. Reynolds for 42 years and was able to make it to her 42nd anniversary on December 17th. She was also able to be with John on his 70th birthday of November 17th. Juanita, her middle name and the one she used all of her life, was born July 25,1935, in Wood River Illinois. At the age of 2 the Jones family moved to San Fernando Valley in California. She is the oldest of 3 girls. Dorothy Louis Jones and Ellen Lucille Jones were born in California. Dorothy resides in Montana and Ellen resides in Arizona. The Jones girls were born to Clyde Ed Jones and Flossie Byrl Zumwalt. Flossie the only daughter of Claude Francis Zumwalt and Martha Frances Autry. She had 4 brothers, Everett, Carl, Donald and William (Bill) Zumwalt. Clyde was the son of Ed Jones and Minnie Eaton West, a full blood Sioux. She was a bareback horse rider in a Dog and Pony Show and played the organ in the theatre during the silent movie era. It is believed by the family she died during the Spanish flu in 1918. Juanita was the mother of Coleen Amelia Smith on August 21, 1955. The baby died and is buried in Kooskia, Idaho. She and her first husband Dean Smith adopted a son, Jeffrey Darrel Smith, born August 29, 1948. On March 5, 1959, a baby girl, Wana Michelle Smith was born. When Wana was 18 years old Juanita met and married John N. Reynolds. They met at Woodland Hills Assembly Hall of Jehovah’s Witnesses in September. Three months later they would be married in the Kingdom Hall of Jehovah’s Witnesses in Sylmar on Bradley Street. Juanita was a very talented musician. She played the organ, piano, vibes, and glockenspiel (bells). She also orchestrated music for the Los Angeles JW orchestra. She would become “assistant” to several JW Circuit Orchestras. She was asked to play the piano with the Los Angeles JW Orchestra on the Kingdom Melodies No. 1 recording. She was always on demand as wedding coordinator and piano player to many, many weddings all across Southern California. Sometimes playing for as many as 3 weddings in one day. Very much loved for her musical abilities. She had a large faith and love for her God, Jehovah, and wanted everyone to know about him too. If you knew her you knew about her beliefs for a better new world of God’s making. She was always a good friend to everyone who knew her and loved her, especially by all those at her beloved Walmart here in Covington, La. where she will be missed by all of us. She was mother to Wana and Jeff. She was the grandmother of Reuben Smith, Sean Smith (sons of Jeannette Smith) and Jordan Smith (son of Sharae Smith). She was great grandmother to Kaylyn Smith, Emily Smith, and Chloe Smith, Adrian Smith and Claire Smith. Just days before she passed away she became great-great grandmother to a boy, Josiah. She was also Aunt and Great Aunt to many nieces and nephews. Also a beloved cousin to David, Trisha, James, Daniel, and Phillip Zumwalt, she loved them all very much. Juanita will always be in our hearts…we will see her again in the resurrection…may we all be there to greet her. Relatives and friends of the family are invited to attend a Memorial Service on Saturday January 26, 2019, at Kingdom Hall of Jehovah’s Witness, Hwy. 21, Abita Springs/Waldheim, at 2:00pm.

Darline Juanita Jones Smith Reynolds passed away quietly at her home on December 23, 2018, in Covington at 11:38pm. She had been having many falls in 2018. The last one was very serious and caused a subdermal hematoma that bled for many hours... View Obituary & Service Information

The family of Darline Juanita Reynolds created this Life Tributes page to make it easy to share your memories.

Darline Juanita Jones Smith Reynolds passed away quietly at her...

Send flowers to the Reynolds family.