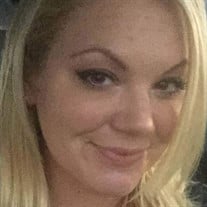 Danielle “Dani Honey” Patricia Bayhi-Christian, passed away unexpectedly at her home on Saturday, February 2, 2019, in Hammond, LA at the age of 36. She was born April 20, 1982, to Mark Farrell and Lisa Bayhi in Metairie, LA. On July 14, 2001, she married Stephen Christian in Waukegan, Illinois. On October 7, 2004, her daughter was born, Ania Christian…from then on her life was complete. Danielle enjoyed working, helping others, spending time with family and friends, and cooking. She was also fond of listening to music, crawfish, and making her special award winning Crawfish Ettoufee. She was a proud U.S. Navy veteran and assistant mortician. Survivors include her husband, daughter, and her brothers Joshua Bayhi and Stephen Farrell. She is proceeded in death by her parents, sister Brandy, and her brother Tj. Funeral Services were held on Thursday, February 7, 2019. Serenity Funeral Home, Covington, in charge of arrangements.

The family of Danielle Patricia Christian created this Life Tributes page to make it easy to share your memories.

Send flowers to the Christian family.