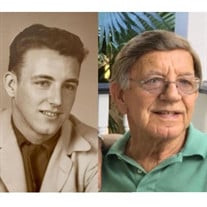 Burton Anthony Couvillion, Sr. passed away peacefully on Sunday, December 27, 2020 in Slidell, LA. He was a New Orleans native and is survived by his children: Gretchen C. Chauvin (BJ), Burton A. Couvillion, Jr. (Dorothy), Greg N. Couvillion (Ann), and Stephen P. Couvillion (Tiffany); his sister: Gail C. Smith (A.J.); his Grandchildren: BJ Nicholas Chauvin (Catherine), Heather C. Grimm (Matt), Kayla C. Cathey (John), Kaitlin Couvillion, Patrick Couvillion, and Emily Couvillion; and his great-grandchildren: Pryor Grimm, Monroe Grimm, Madelyn Cathey, and Declan Chauvin. He is also survived by former wife Carmen G. Ferro, mother of Gretchen, Burton, Jr., and Greg, and former wife Patricia M. Malbrough, mother of Stephen. He was preceded in death by his parents, Percy and Josephine Couvillion, natives of Plaucheville, Louisiana. His vivid childhood memories of summers spent in Avoyelles Parish were often the subject of funny and heartwarming stories. He grew up in the St. Roch 8th/9th Ward area, attended Star of the Sea Elementary and Warren Easton High School, where he played trumpet as a member of the band; he was also an Eagle Scout. After a stint in the military during the Korean War and the auto parts business, he became a prolific home builder in the development of New Orleans East. He was a member of the Home Builders association for many years. His meticulous style and attention to detail became a trademark of his building business. Eventually, he focused his home building business and life in the Eden Isles area of Slidell. As a young man, favorite pastimes included bowling, hunting and fishing, and later spending time with many friends from Papillion and Eden Isles, notwithstanding his love for his dogs and, for his boats. He enjoyed being a member of the Krewes of Pontchartrain and Endymion and later served as King of the Krewe of Bilge in 1999. He was always thoughtful, generous and helpful to all. He will be deeply missed by family and friends, fondly remembering his numerous suggestions and advice to improve everything from your car, iPhone or your life. Christmas was his favorite time of year as he would lovingly and generously shower the children, grandchildren, great-grandchildren and his beloved nieces and nephews with the much anticipated “white envelopes.” His generosity was one of his greatest traits and his spirit to “party” always enhanced the festivities. Don’t forget the Queen Anne Dark Chocolate Cherries. The family would like to recognize his dear friend, Betty Mayoral for time she spent with him throughout the years, and at his bedside upon his passing. Private Services are being handled by Serenity Funeral Home, Covington, Louisiana. Condolences and tributes can be posted at www.serenitycovington.com

The family of Burton Anthony Couvillion Sr. created this Life Tributes page to make it easy to share your memories.

Send flowers to the Couvillion family.