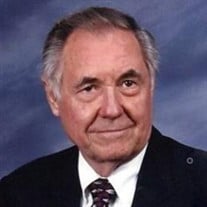 Audie Owren Mitchell passed away in Slidell, LA on Saturday, April 18, 2020 at the age of 87. He was predeceased by his wife of 50 years, Charlotte Ferguson Mitchell. Audie O. Mitchell is survived by his three children, Dana Criswell, Kathy Grau, Tommy Mitchell and their spouses as well as eight grandchildren and ten great-grandchildren. He is also survived by his sister Brenda Bridges and many nieces and nephews. A Slidell resident for over 50 years, Audie was a long-time member of the First Baptist Church there. His faith in Christ was the cornerstone of his life. For as long as he was able, he served in a variety of roles at the church and had many of his closest friends as part of the fellowship there. Audie was born and raised near Florence, MS. He grew up on a family farm and left high school early to serve in the US Air Force. He was stationed at the 38th Parallel in Korea as part of the 607th Aircraft Control & Warning Radar Unit during the war. After the war, he attended community college and then Mississippi State University where he graduated with a bachelor’s degree in Electrical Engineering. He built a career with The National Aeronautics and Space Administration, starting at the Marshall Space Flight Center in Huntsville, AL and then moving on to the NASA Michoud Assembly Facility in New Orleans. Audie worked for the Defense Contract Administration Service in quality control for the Apollo and Space Shuttle programs. Audie loved traveling and the outdoors. Hiking, canoeing and camping were some of his favorite activities and he was an avid hunter and fisherman for most of his life. He also enjoyed home DIY projects and always carried an assortment of tools in case a friend, family member, or neighbor needed help with a project or something requiring repair. After retirement, he spent several years traveling the US with Charlotte in their RV and then made several long trips exploring Europe and Asia. He was loved by many and will be missed by all his family and friends. A Memorial Service will be held at some point in the future when the world has returned to a somewhat more normal state. Date and time of Service will be updated on the Serenity Funeral Home website when that information becomes available. In lieu of flowers, the family suggests donations to First Baptist Church Slidell, The Michael J. Fox Foundation for Parkinson’s Research, or Access Health Louisiana’s fund to help Healthcare Workers. Condolences and tributes can be posted at www.serenitycovington.com

Audie Owren Mitchell passed away in Slidell, LA on Saturday, April 18, 2020 at the age of 87. He was predeceased by his wife of 50 years, Charlotte Ferguson Mitchell. Audie O. Mitchell is survived by his three children, Dana Criswell, Kathy... View Obituary & Service Information

The family of Audie Owren Mitchell created this Life Tributes page to make it easy to share your memories.

Audie Owren Mitchell passed away in Slidell, LA on Saturday,...

Send flowers to the Mitchell family.