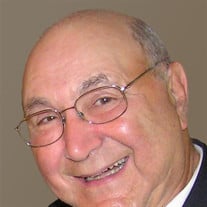 Anthony Benny “Ben” Rizzuto passed away on Sunday, December 30, 2018, at his home in River Ridge, Louisiana. Ben was born in Baton Rouge and raised in New Orleans, where he graduated from Jesuit High School. He then went to LSU where he received a degree in Chemistry and Zoology. Following a 2 year stint in the Army Chemical Corp, Ben attended Mississippi State where he obtained a Master’s Degree in Microbiology. Most importantly, he held a PhD in Storytelling. After graduating from Mississippi State he moved to the great white north (New Jersey) where his career culminated with Ben becoming Director of Research and Development of worldwide operations for Domino Sugar. He held numerous patents, some of which are still incorporated in food products today. Upon retiring 27 years ago, he returned to New Orleans. He was a parishioner of St. Rita’s Catholic Church in Harahan and a member of the Knights of Columbus. His passions included golf, golf and more golf. He was a member of Colonial Country Club and Pocono Pines Golf Club and was an active participant in the Senior Olympics. He took great pride in the fact that his only hole in one occurred on a golf course designed and built by his father. Ben was a rabid LSU Tigers and New Orleans Saints fan. He also made a mean Bloody Mary. Ben was married for 61 years to the love of his life, Lorraine Achee. He was the devoted father of Richard T. Rizzuto, Judy A. Williams (Doug), Joan M. Prator (Robert) and Robert C. Rizzuto (Audrey). He was the brother of Gaspard Thomas “Tom” Rizzuto (Geraldine) and cousin of Tony Compagno (Gayle) who was raised as a brother. He was the loving grandfather of Christopher Williams, Shelby Williams, Max Rizzuto, Andrew Prator, Ariana Prator and Gabriel Prator. Relatives and friends are invited to attend visitation at St. Rita Catholic Church, 7100 Jefferson Highway, Harahan, on Friday, January 4, 2019, beginning at 10:30 AM followed by a Funeral Mass at 12:00 noon. Interment will immediately follow at Lake Lawn Park Mausoleum in New Orleans. The family would like to thank the doctors and staff at Ochsner Hospital for giving Ben and his family the best Christmas ever. The family also wishes to thank St. Joseph’s Hospice for its loving care. Friends and family can share stories of Ben at www.serenitycovington.com.

Anthony Benny &#8220;Ben&#8221; Rizzuto passed away on Sunday, December 30, 2018, at his home in River Ridge, Louisiana. Ben was born in Baton Rouge and raised in New Orleans, where he graduated from Jesuit High School. He then went to LSU where... View Obituary & Service Information

The family of Anthony Benny Rizzuto created this Life Tributes page to make it easy to share your memories.

Send flowers to the Rizzuto family.