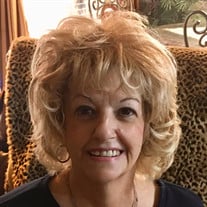 Angelina “Angie” Terranova Lupo, passed away Thursday, June 13, 2019, at the age of 75, at St. Tammany Parish Hospital, in Covington, LA. She enjoyed cooking, country music, gardening, shopping, and spending time with her family. She was predeceased by her loving husband of 55 years, Salvadore Lupo. She is survived by her two children, Kevin Lupo (Rhonda) and Debra Theobold (Chris Jr.). She was the daughter of the late Nicholas and Johanna Terranova. She had four sisters, the late Ann Montz, PatriciaTerranova Ferguson, the late Rosemary Dahl, and Carolyn Veasey, as well as four grandchildren, Trey, Daniel, and Nicole Theobold and Amber Lupo. Relatives and friends are invited to the attend a Catholic Prayer Service at 1:00 PM on Monday, June 17, 2019, at Serenity Funeral Home, 20419 Hwy 36, Covington, LA 70433. Visitation starts at 11:00 AM until service time. Internment at Southeast Louisiana Veterans Cemetery at a later date.

The family of Angelina "Angie" Lupo created this Life Tributes page to make it easy to share your memories.

Send flowers to the Lupo family.