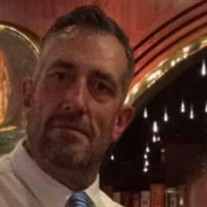 Andrew Michael Charlton, affectionately nicknamed “Big Andy” age 46, of Slidell, Louisiana passed Saturday, November 7, 2020 as a result of chronic asthma and severe lung disease. He was born in 1974 in Riverside California, the son of Patricia Nelson and Michael Charlton. As a young man, Andy suffered from asthma but never let it slow him down. During his extensive hospital stays in Loma Linda Andy always found a way to sneak in some friendly wheelchair races and often visited the other patients to offer joy and conversation. Once Andy’s health began to improve he found joy in drama class and the theatre. In his late teens, he relocated with his family to Indiana and graduated from High School. He attended Vincennes University and The University of Western New Mexico where he played basketball and studied sports psychology. After college Andy went on to pursue a professional basketball career with much success. Basketball allowed him to travel the world as well as 42 different states. Andy’s true passion in life was artistic woodworking as well as acting. Once retired from professional basketball he opened his own business in Sarasota, Florida where he specialized in custom carpentry. Andy then relocated to Charleston, South Carolina to reunite with his brother Justin. As part of a family decision he moved to Slidell in late 2017 and made many friends who will miss him dearly. He enjoyed boating and Cajun Cuisine along with all things relating to the “Sportsman’s Paradise”. Andy is survived by his mother Patricia; his siblings, Justin, Amanda, Monica, and Michael. He also leaves his father Merle and the Vanvolkenburgh family of Greenwood, Indiana. Andy was blessed in life to have 3 true father figures, his birth father Michael, his stepfather Craig who passed in 2018, and his father in adult life Merle. Andy was preceded in death by his Aunt Pam, and his Uncle Sammy. His surviving Aunts and Uncles include Paul, Penny, Peggi, Carolyn, Tim, Barb, Jojo, and Beth. Preceding him in death, his Cousin Baby Samantha. Surviving Cousins include Becky Figueroa, Robert Casteen, Brannon Owens, Adam Ginn, Robert Kennedy, Jeff Kennedy, Troy Graham, Cynthia Baltunis, Corinne Jeffers, Georgianna Cardenas, Jason Smith, and Kristy Rodrigues. Andy will be missed by friends and family all over the world. A true gentle giant, he knew no stranger. This big man with a heart of pure gold, he was salt of the Earth to all who knew him. Rest easy, without pain and know that you are loved…… Never goodbye, see you later! Services are private. Condolences and tributes can be posted at www.serenitycovington.com

The family of Andrew "Big Andy" Michael Charlton created this Life Tributes page to make it easy to share your memories.

Send flowers to the Charlton family.