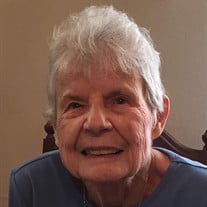 Aline Daigle Wilson, age 88, a lifelong resident of Jefferson Parish, passed away peacefully in her sleep on Monday, December 2, 2019. Aline was born in 1931 and attended St. Agnes Grammar School and graduated from Jefferson High School. She... View Obituary & Service Information

The family of Aline Daigle Wilson created this Life Tributes page to make it easy to share your memories.

Send flowers to the Wilson family.